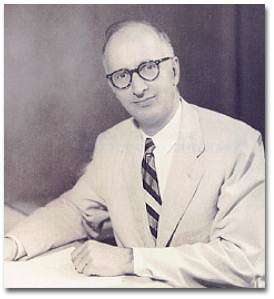 Melcher was born July 10, 1912, at Newton Center, Massachusetts, the son of Marguerite Fellows Melcher and Frederic Gershom Melcher (later President of R. R. Bowker Company). Daniel Melcher graduated from Harvard College (A.B.) in 1934. In 1934 and 1935, Melcher was a publicity assistant at the London publishing house of George Allen and Unwin and an assistant and student of publishing methods at other houses in London and Leipzig, Germany. From 1936 to 1942 he worked in a variety of sales promotion and management capacities at Henry Holt and Company, Oxford University Press, Alliance Book Corporation, and Viking Press, all in New York City. During World War II he worked in Washington, D.C., with the U.S. Treasury Department’s War Finance Division, first as publishing consultant and then as National Director of its education section. In 1946 he was Director of the National Committee on Atomic Information, also in Washington.

When he joined the R. R. Bowker Company, New York, in 1947, Melcher was appointed Publisher of the firm’s Library Journal. He quickly began developing the 70-year-old magazine into a major publication dealing with every aspect of the library profession, and in 1954 he founded, as an adjunct, Junior Libraries (School Library Journal, beginning 1961).

At the same time, Melcher had been working on the idea of a series of current in-print directories of American books. He devised the procedures by which the directories could be edited and produced, and in 1948 the firm launched the annual Books in Print, with author and title indexes. There followed, also under Melcher’s vigorous direction, Paperbound Books in Print (1956), Subject Guide to Books in Print (1957), Forthcoming Books (advance listings), and American Book Publishing Record (catalogue listings, current and cumulative, in Dewey cataloguing sequence, 1961).

Meanwhile, Melcher was writing articles on library questions for LJ and on book distribution and book manufacturing for Publishers’ Weekly. He contributed to the automated “belt press” concept of book manufacturing. His concern for distribution made him a major force in the mid-1960s in establishing the International Standard Book Numbering System.

Melcher became a Director and General Manager of Bowker in 1956; Vice-President, 1959; and President, 1963-68. After Bowker acquired Jacques Cattell Press, biographical directory publisher, Melcher was its Board Chairman, 1961-67. He took part in the Bowker stockholders’ decision to sell the firm to the Xerox Corporation January 1, 1968, and was then Bowker Chairman under Xerox but resigned early in 1969.

He was Board Chairman of Gale Research Corporation, 1971-73, and thereafter an independent consultant. He was a member of the ALA Council, 1972-74, and from 1969 a board member of Institutes for Achievement of Human Potentials, with a special interest in the ways by which very young children can learn to read.

— By Chandler B. Grannis, From the American Library Association Encyclopedia of Library and Information Science (New York: 3rd Edition, 1993)

Daniel Melcher of Unity Church (Unitarian), Montclair, N.J., to honor his father, made possible the annual Melcher Book Award presented by the Unitarian Universalist Association for a work judged the most significant contribution to religious liberalism.

The Biography of Frederic Gershom Melcher