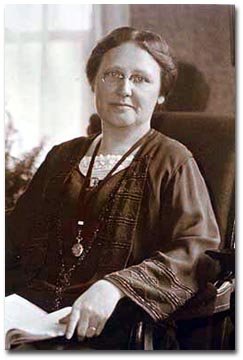 Clara Cook Helvie was ordained in a period when there was decided prejudice against women as Unitarian ministers.

She was born in Chaumont, New York January 24, 1876 to James H. and Marge (Beckwith) Cook. She was descended from eleven Mayflower pilgrims and was a cousin of William Howard Taft. Her mother died when she was very young, and her father became a recluse in the Adirondack Mountains.

Clara Cook lived with relatives who renamed her Clara Bailey, she attended public schools in Buffalo, New York and Sunday School at the First Unitarian Church. Despite many difficulties, she obtained a good education, graduating from Canton’s Business College in Buffalo and attending Emerson College of Oratory in Boston in 1901. She worked for many years as a secretary. One job took her to Puerto Rico, and upon her return she collected a substantial gift of books for the San Juan Public Library.

She married Charles Elmer Helvie on April 3, 1902 in Newton, Massachusetts. For the next eight years the Helvies lived in Manila P.I. and travelled in Japan and China. She edited the women’s page of The Manila Times, then the leading paper in the Philippines—published a series of articles on old institutions in the city, directed the erection of a soldiers’ monument at Fort William commemorating the Spanish-American War, raised a hospital fund for charged soldiers, and was a social activist.

She returned to the United States in 1910 and worked as Correspondence Clerk for the Philadelphia and Reading Coal and Iron Company in Buffalo.

Widowed by 1916, she attended Meadville Theological School and graduated in 1917. For five summers she returned for postgraduate study and attended Harvard Summer School of Theology for one summer. When she applied for ordination to the Unitarian ministry, she found that no woman had been ordained into the denomination since Rowena Morse Mann in 1906, and many men were adverse to women ministers despite the fact that thirty-nine women had been ordained since 1871. She was told, essentially, that women hadn’t contributed any worthwhile work except Margaret Bowers Barnard. This highly conservative opinion discounted the important work of the Iowa sisterhood in establishing societies in the midwest and untold other contributions made by women over the previous forty-six years.

Clara Cook Helvie’s case was finally supported by several prominent men at the General Conference in Montreal in 1917, and several churches offered to ordain her. She accepted the offer of the Wheeling, West Virginia Unitarian church and was ordained there at the age of forty-one. She worked continuously, except for about one and one-half years, until 1936 when the Depression overtook her; as was the case in many other fields, men often had first choice of jobs. She felt there was “an unreasoned opposition to women ministers” and continued: “Of course a woman gets only the most difficult posts, but this challenge adds zest to the work…. I can think of no greater blessing that could come to them than to have a group of mature women ministers take over their pulpits for a few years and nurse them back to life and service. When that time comes, however, like all adolescents, they will grow too superior for ‘mother’s ministrations,’ and will long for a man minister.”

Clara pursued her interest in women ministers in the 1920’s by compiling a manuscript titled “Unitarian Women Ministers” which was never published. Thirty years later she collected short biographies of Universalist women ministers. She corresponded with many who were still alive at that time, asking for autobiographical information and seeking their answers to questions on what, if any, difficulties they had found as women ministers and would they recommend it as a career for other women. Clara Cook Helvie herself felt that a young woman would be “greatly handicapped, even if she should secure a church, but that a mature older woman with varying experience to draw upon and “no competing interests” (presumably including husband and children) would probably have a much better chance of making a meaningful life.

She worked on many denominational committees, and was the only woman minister to take part in the dedication service of the Unitarian Headquarters at 25 Beacon Street and of the First Church in Washington, D.C. She was active outside the church also.

Clara Cook Helvie was keen minded, warm and generous. After retirement she lived in Middleboro until hardening of the arteries necessitated her hospitalization at the Taunton State Hospital. She bequeathed most of her estate to the American Unitarian Association, the income of which was to assist needy ministers. She died in her eighty-third year, July 22, 1969.

–By Catherine F. Hitchings, Author of Universalist and Unitarian Women Ministers. Excerpted from The Journal of the Universalist Historical Society, Volume X, 1975.

Editor’s Note: In contrast to the foregoing situation, Helen Cohen, minister of the First Parish in Lexington, Massachusetts, tells of hearing stories of children now asking whether boys can be ministers. Dr. Cohen herself had wanted to be a minister when she was 15, but when she applied to enter divinity school in 1977, she had never even seen a woman minister. Now, at the beginning of the twenty-first century, there are more active female ministers in fellowship in the Unitarian Universalist Association than male ministers. Nevertheless, from 1900 to 1917, when Clara Cook Helvie was ordained as a Unitarian minister, the number of women ministers ordained was zero.

Woods, Gretchen, ed. Leaping From Our Spheres: The Impact of Women on the Unitarian Universalist Ministry. Boston: UUMA Center Committee, 2000.