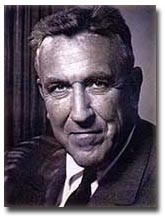 Chester Bowles was born in Springfield, Massachusetts on April 5, 1901. He and his parents were active in the Springfield Unitarian Church. His grandfather, Samuel Bowles, was editor of the Springfield Republican in which he voiced support for liberal causes, including the ideals of the Union during the Civil War.

Bowles attended Choate School in Wallingford Connecticut, and later the Sheffield Scientific School at Yale, from which he received his B.S. in 1924. He would often voice his regret that he had not pursued a liberal education.

Because of ideological differences with his cousin, who published the family newspaper, he took a job for $25 per week as a copy writer at a New York City advertising agency, the George Batton Company. Bowles’ creativity and ease in interacting with the media quickly impressed Batton. In 1929, he started a similar agency with William Benton, also a Yale graduate. Despite the economic disaster that was the Great Depression, the business flourished, and was a multimillion dollar corporation by the mid 1930s.
Despite his fortunate economic circumstances, Bowles never relinquished his desire to help people. He used his influence to convince mega-corporations such as Proctor & Gamble and Maxwell House to slash prices while improving product quality. 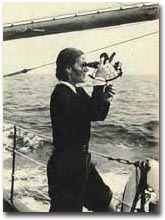 Monetary success alone did not satisfy Bowles. He truly felt the need to try to change the world for the better on a large scale. By 1941 his salary was $250,000, but he was searching for another job. The events of December 7, 1941 convinced him that Navy service was the correct route, but he was rejected because of an ear problem. His uncanny networking abilities, however had paid off; he was offered the position of director of the Office of Price Administration in Connecticut, and accepted. His ambition, however, proved that he needed a greater role in public service. The opportunity for national service occurred when President Franklin D. Roosevelt appointed him general manager of the Federal Price Administration in 1943. While traveling to Washington to begin his new job, he commented, “No sensible person would seek a job of this kind.” Although the task would not be easy, Bowles realized that he could ameliorate the lives of Americans all across the nation. He oversaw 70,000 employees and 500,000 volunteers.

The Truman years began with Bowles as the director of the Office of Economic Stability in 1946. In that same year, he wrote his first book, Tomorrow Without Fear, in which he wrote that after the Second World War, we Americans had to “conduct ourselves, so to plan our lives, so to use our great productive power for the benefit of all of us, that we and all the world’s people shall move steadily toward that tomorrow … for which all mankind yearns.”

Connecticut would be his adopted home state, and he entered the gubernatorial race in 1946, but lost, only to run again in 1948. The second time around he defeated the Republican James C. Shannon.

During this time as a U.S. politician Bowles was also heavily involved with the United Nations. His service reached the level in international scale when he was appointed as a delegate to the United Nations Educational, Scientific, and Cultural Organization in Paris. Unlike many other leaders Bowles knew the importance of being in contact with those whom he was trying to help. He worked for the UN Appeal for Children in Europe and traveled across the continent documenting the conditions of his day. The UN work caused him to identify a new mission: to convince Americans that the only way for the U.S. to remain prosperous was to spread prosperity and democracy around the world. The first case study for Bowles of the lack of prosperity in a massive democracy was that of India, the nation to which he was named ambassador in 1951. He did not seek to spread prosperity theory; instead, he used practical measures to enhance the quality of life for many by the use of money, technology in a spirit of idealism. 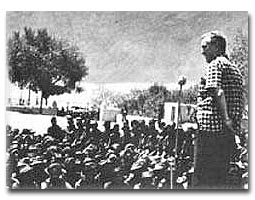 Bowles’s stay in India was unique because he refused to separate himself from the people and took pains to live among them. He went as far as to ride a bicycle to work every day, and to send his children to public school in India. His daughter Cynthia loved the nation so much that she chronicled her journeys in the book, At Home in India.

In 1953 Bowles resigned to write a book about his liberal democratic beliefs that so influenced his public service, such as the equality of races and the need to uplift the disadvantaged. He also served in the House of Representatives from Connecticut’s second district.

The Kennedy administration did not accept Bowles as readily as previous administrations, primarily because he was willing to speak out on what he considered to be abuses of power, such as the botched Bay of Pigs invasion of 1961. He was appointed U. S. Undersecretary of State, but was relieved of that post in 1963, at which point he again became the United States Ambassador to India. In 1963, he wrote The Makings of a Just Society, in which he concentrated on ways to empower less developed nations such as China, India, and African and Latin American states.

After suffering a stroke, Chester Bliss Bowles passed away in 1986.

Although he was never an active adult member of a Unitarian congregation, his liberal religious practice of faith in action was decisive. The question of the family’s religious identification surfaced early when one of his children was asked by a fourth grade teacher, “What is your religion?” Samuel replied, “I don’t know!” When he got home he asked his mother, who said, “Tell her you’re a Unitarian.” When Sam notified the teacher, she exclaimed, “That’s not a religion!”

Chester Bowles practiced a truly global human faith dedicated to strengthening international prosperity and unity in the world. American historian Henry Steele Commager delineated this in his book, The Conscience of a Liberal, celebrating the life and thought of Chester Bowles.

There is no better example of an international public servant than Chester Bowles.

“As a college senior, in 1924, I determined to spend my life in government,” Mr. Bowles has written, and he tells us, too — it is an illuminating observation — that he was one of only three or four members of the class of 1924 at Yale for whom a public career held any interest. Circumstances frustrated this early ambition, but did not eradicate it; when war came to America in 1941, Mr. Bowles moved eagerly from private to public enterprise, and it is to public enterprise that he has devoted his energies and his talents for the past two decades. 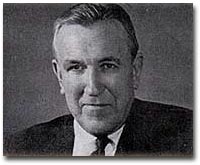 Four climacterics stand out sharply in Mr. Bowles’ career. The first came with the call for public service during the war. First as Price Administrator under President Roosevelt, and later as special assistant to Trygve Lie in the United Nations, Mr. Bowles learned some hard lessons in politics and administration, and was launched upon those world travels which have made him a familiar figure in every continent and almost every country, and which prepared him for conceiving early in 1947 his remarkable paper anticipating the Marshall Plan.

The second climacteric was his election as Governor of Connecticut. That post brought home to him, in daily and familiar fashion, the importance of grass-roots democracy and grass-roots liberalism. It made clear, too, the relation of local to national and even to world affairs. It gave him the habit of address to the people of farm and village and factory and office which has since enabled him to achieve a rapport with the most miscellaneous of audiences in many lands.
The third climacteric came with his appointment as Ambassador to India. This introduced him to another civilization and another world, and it rounded out his education as an international public servant when India was the first of free Asian powers. 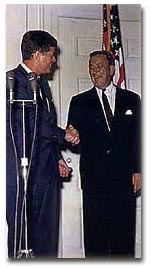 The fourth climacteric came in 1960 in the second year of a term as Congressman from Connecticut when Mr. Bowles was chosen first as foreign policy adviser to Senator Kennedy and then chairman of the Platform Committee of the Democratic National Convention.

In regard to that platform, two features stand out: one is that it is the most liberal platform, both domestically and in its world-wide implications, ever endorsed by the Democratic party; the second is that it was adopted by the convention amid general enthusiasm and with a minimum of controversy.
During twenty years of public service Mr. Bowles has been continuously articulate. In these years he has written no less than seven books setting forth his philosophy of domestic and — particularly — of foreign policy. There is probably no other man in American public life who has spent more time and energy talking foreign policy to the American people over the past decade. In forty-one states, at scores of universities, before Democratic and Republican audiences alike, he has shown an extraordinary capacity to communicate.

Over the years Chester Bowles has grown from a local to a national to a world figure. Through all of these years he has been one of those to whom the great words of Pericles apply, that “knowing the secret of happiness to be freedom and the secret of freedom a brave heart, he did not idly stand aside from the enemy’s onset.”

BOWLES, Chester Bliss, a Representative from Connecticut; born in Springfield, Hampden County, Mass., April 5, 1901; graduated from Choate School, Wallingford, Conn., in 1919 and from Yale University in 1924; businessman in Springfield, Mass., and New York City, 1924-1929; cofounder Benton & Bowles, Inc., an advertising agency, New York City, in 1929 and was chairman of the board 1936-1941; Connecticut State rationing administrator in 1942, State director in 1942 and 1943, and general manager July-October 1943; administrator, Office of Price Administration, 1943-1946; member, War Production Board and Petroleum Board for War 1943-1946; chairman, Economic Stabilization Board, 1946; delegate to the United Nations Economic, Scientific and Cultural Organization Conference at Paris in 1946;

Governor of Connecticut 1949-1951; Ambassador to India and Nepal 1951-1953; author and lecturer; trustee of Rockefeller Foundation, Woodrow Wilson Foundation, and Franklin D. Roosevelt Foundation; delegate to the Democratic National Conventions in 1940, 1948, and 1956; chairman of the platform committee, Democratic National Convention, in 1960; elected as a Democrat to the Eighty-sixth Congress (January 3, 1959-January 3, 1961); was not a candidate for renomination in 1960; Under Secretary of State, 1961; President‚ special representative and advisor, 1961-1963; returned to India as United States Ambassador and served from 1963 to 1969; was a resident of Essex, Conn., until his death there on May 25, 1986.

— Courtesy of the U.S. House of Representatives Historical Office