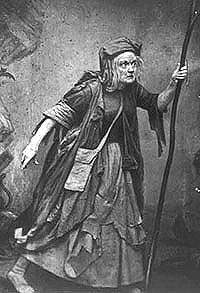 Charlotte Cushman’s father was a descendant of Robert Cushman, one of the Pilgrims who landed in Plymouth in 1620.

She was a celebrated actress who triumphed in both the United States and Great Britain—the first native-born woman so honored. Though school ended for her at age 13, she learned much through her uncle’s taking her to the Tremont Theatre in Boston where both English and American actors performed. Friends advised Charlotte, “You are a born actress; go on the stage.”

Charlotte Cushman was electrifying in playing both male and female roles—including both Lady Macbeth and Hamlet! Ralph Waldo Emerson was her minister when she joined the Second Church (Unitarian) in Boston, where she sang in the choir.

Among her admirers were Thomas Carlyle, Henry Longfellow, Julia Ward Howe, and Fanny Kemble. In 1915 she was elected to the New York University Hall of Fame.