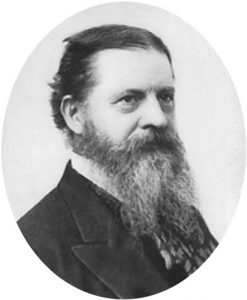 In those youthful Harvard Square philosophical discussions, the doctrine of pragmatism saw the light in 1873. The meaning of an idea could be known only considering its consequences for practical experience, for actual or possible action. In writing later to Peirce, William James exclaimed, “There is no more original thinker than yourself in our generation.” The two had become acquainted when both of them were studying chemistry in the Lawrence Scientific School. Charles’s father, Benjamin Peirce, the Perkins Professor of Mathematics and Astronomy at Harvard, has been described as America’s most eminent scientist in the nineteenth contury. He was one of the incorporators of the National Academy of Sciences, one of the founders of the Harvard Observatory, and author of The History of Harvard University 1636-1775. His students included two future presidents of the university, Charles William Eliot and A. Lawrence Lowell.

Among the familiar figures in the home in which Charles grew up were not only leading men of science such as Louis Agassiz (his father’s closest friend) but Margaret Fuller, Judge Story, Henry Wadsworth Longfellow, James Russell Lowell, Daniel Webster, James Freeman Clarke, William Henry Channing, and sometimes Ralph Waldo Emerson. In The Developmont of Peirce’s Philosophy, Murray G. Murphey says of Charles’s father: “The elder Peirce was a deeply religious man of the Unitarian school. He regarded nature as the exemplar of the wisdom of the Divine Geometer, and science as a means to understanding that wisdom.” He affirmed, There is but one God, and science is the knowledge of God. This spirit went forth in the son. 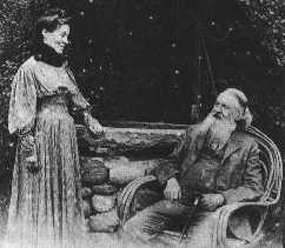 Peirce and his wife Juliette in front of their home, 1908.

Charles Peirce was born in Cambridge in 1839. He learned to read and write without the usual instruction. At the age of eight he fell hopelessly in love. To drown his sorrow, he studied chemistry. His father used to play a card game—double rummy—with him from 10 in the evening until dawn, teaching the child concentration by correcting each mistaken play. While still in high school, the youngster was reading no less a work than Kant’s Critique of Pure Reason.

When Charles was a student at the Cambridge High and Latin School, however, he played hooky and managed to get himself expelled several times. Nevertheless, he did graduate and went to Harvard College, where he was the first person to receive a Bachelor of Science degree in chemistry summa cum laude. Then assisting at the Harvard Observatory, he was given the honor of being asked to deliver a series of Harvard lectures on philosophy. It became clear to him in the Metaphysical Club discussions that, What a man really believes is what he would be ready to act upon, and to risk much upon. 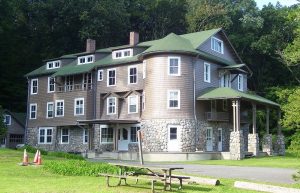 In 1877, when Charles was sailing to Europe to attend a scientific conference, he wrote “How to Make Our Ideas Clear”—the classic Popular Science paper which to this day marks the origin of a continuing series of publications in which he delineated the philosophy of pragmatism. This article was the foundation work of a theological revolution whose end is nowhere in sight, and whose premise is, I think, possibly second to none within the past century. It is a philosophy of freedom, chance, evolution with respect to personality as well as God. As his frame of thought developed, Charles Sanders Peirce spoke of “firstness,” “secondness,” and “thirdness.”

Let it suffice now to note that here is an evolutionary philosopher who took growth seriously. Here is a man who in the very foundations of his thought put potentiality first as an aspect of reality. His is truly a philosophy of freedom since, even for God, the future is not wholly determined. Here now we have an early inkling of the contribution made by the first of several persons who have helped give us an understanding of the Harvard Square God, who is also the God of our ever open Universe. For a glimpse of the Harvard Square God—a science oriented, world-affirming vision—note the power of these words of Charles Sanders Peirce:

Reference to the future is an essential element of personality. Were the ends of a person already explicit, there would be no room for development, for growth, for life; and consequently there would be no personality. The mere carrying out of predetermined purposes is mechanical. This remark has an application to the philosophy of religion. It is that a genuine evolutionary philosophy, one that makes the principle of growth a primordial element of the universe, is so far from being antagonistic to the idea of a personal creator that it is really inseparable from that idea.

According to that logical doctrine which the present writer first formulated in 1873 and named Pragmatism, the true meaning of any product of the intellect lies in whatever unitary determination it would impart to practical conduct under any and every conceivable circumstance, supposing such conduct to be guided by reflexion carried to an ultimate limit.

We can know nothing except what we directly experience. So all that we can anyway know relates to experience. Where would such an idea, say as that of God, come from, if not from direct experience? Open your eyes—and your heart, which is also a perceptive organ—and you see God.

Everybody can see that the statement of St. John (God is Love) is the forumula of an evolutionary philosophy, which teaches that growth comes only from love, from the ardent impulse to fulfill another’s highest impulse. The philosophy we draw from John’s gospel is that this is the way mind develops; and as for the cosmos, only so far as it yet is mind, and so has life, is it capable of further evolution. Love, recognizing germs of loveliness in the hateful, gradually warms it to life, and makes it lovely.