In 1947 Hartshorne received a joint appointment at Chicago in the Philosophy Department and the Meadville/Lombard Theological School. Thus, he knew the central figures in the so-called Chicago School of Theology: Henry Nelson Wieman, Daniel Day Williams, Bernard Meland, and Bernard Loomer. Like Hartshorne, they found Whitehead’s philosophy useful, stressed the dynamic aspects of nature, and denied supernaturalism. But he emphatically rejected their empirical approach to theology. Over the years Hartshorne’s defense of his version of theism attracted more attention than other aspects of his thought. 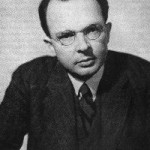 Rudolf Carnap, who helped Hartshorne with
his refutation of classical theism.

In The Divine Relativity: A Social Conception of God (1948) Hartshorne disagrees with classical theists, such as St. Thomas Aquinas, who claim that God is unaffected in any way by creatures—that God is wholly necessary and the world is wholly contingent. Because God is all-inclusive, Hartshorne says, God is affected by and thus related to all that exists. Hartshorne offers a proof of this idea—and a fortiori a disproof of the classical theistic idea—that Carnap helped him to formulate more rigorously: if W is contingent (that is, if it could be otherwise), then knowledge of W must be contingent. Thus, if God knows the world, and the world is contingent, then God is contingent, at least in respect to God’s knowledge of the world.

Aquinas and others argue that if God is contingent then God might cease to exist, which is absurd. Hartshorne replies that God need not be conceived as contingent in all respects: “That God exists is one with his essence and is an analytic truth . . . but how, or in what actual state of experience or knowledge or will, he exists is contingent in the same sense as is our existence.“ God’s essence (defining characteristic) may be to exist. But the particular way in which that existence is realized—for instance, as knowing, loving, and influencing this world state rather than some other possible world state—is not necessary. One could think of the existence of God as a set whose members are the divine experiences: to say that God necessarily exists is to say that the set of divine experiences can never be empty, but the specific experiences that fill the set are not necessary. This distinction is that between existence, or the fact that a thing is, and actuality, or the particular way in which the existence is realized. David Tracy calls this distinction “Hartshorne’s discovery.” It allows one to say, without contradiction, that God’s existence is necessary but God’s actuality is contingent.In The Divine Relativity: A Social Conception of God (1948) Hartshorne disagrees with classical theists, such as St. Thomas Aquinas, who claim that God is unaffected in any way by creatures—that God is wholly necessary and the world is wholly contingent. Because God is all-inclusive, Hartshorne says, God is affected by and thus related to all that exists. Hartshorne offers a proof of this idea—and a fortiori a disproof of the classical theistic idea—that Carnap helped him to formulate more rigorously: if W is contingent (that is, if it could be otherwise), then knowledge of W must be contingent. Thus, if God knows the world, and the world is contingent, then God is contingent, at least in respect to God’s knowledge of the world.

The Divine Relativity characterizes God as the “self-surpassing surpasser of all” and thereby makes a clean break with the dominant theological tradition. Hartshorne said that he recalled getting the idea of God as self-surpassing partly from a female student. Aristotle’s and Aquinas’s idea of God as the unmoved mover Hartshorne calls ”A perfect example of a half-truth parading as the whole truth. A God who loves and is loved by the creatures is anything but unmoved.” The existence of God is unmoved in the sense that it is unchanging; but the actuality of God is constantly changing as it adjusts with infinite patience to the creative advance of the world. The set of divine experiences is constantly gaining new members as the temporal process continues.

Addressing the issue of religious language, Hartshorne asks in what sense, if any, concepts rooted in human discourse can apply literally to God. He answers that one is speaking literally when one says that God is all-inclusive, an individual with strictly universal functions. No more than one all-inclusive being can exist: the term human being does not specify how many human beings could exist; but all-inclusive being can apply to only one individual; polytheism, therefore, is false. Unlike other individuals, God is definable by concepts alone. Furthermore, the concepts applied to God, such as supreme love, power, and knowledge, signify the eminent exemplifications of these qualities. For example, the love of a non-divine being is mixed with selfishness, stubbornness, and lack of sympathy; divine love is not. Hence, the quality of love, as ascribed to God, is an unqualified concern for the welfare of others. Divine love is love in its most literal sense. Thus, “theology (so far as it is the theory of the essence of deity) is the most literal of all sciences of existence. It is anthropology (including theological anthropology) that is shot full of metaphors and statements never literally true.”

Schubert Ogden, one of Hartshorne’s students at Chicago who became a well-known theologian, observes in Existence and Actuality: Conversations with Charles Hartshorne (1984), edited by John B. Cobb Jr. and Franklin I. Gamwell, that Hartshorne’s position on religious language requires apparently incompatible claims. First, he says, Hartshorne argues that human beings’ understanding of language about God must be grounded in their understanding of themselves. For instance, one can say that God is love, because one understands the meaning of love in human life. On the other hand, Hartshorne often argues that people understand divine qualities not by finding them within human experience but by imaginatively subtracting the specifically human defects and extrapolating to God. Hartshorne concedes that unresolved tensions exist in his theory of religious language. He argues, however:

The analogy from us to God implies a reverse analogy from God to us. In learning the meaning of words we appear necessarily to follow the us-to-God path, but then we must be able to follow conceptually the reverse path to understand fully what we have done. This is a matter of logical coherence.

For Hartshorne, logical coherence is the final test of metaphysical truth. Thus, the question becomes whether it makes logical sense to follow the conceptual God-to-us path. To answer this question, more is required than a theory of religious language.

That Hartshorne spoke with great confidence about God has not escaped the notice even of his admirers. The popular science writer Martin Gardner, another of Hartshorne’s students at Chicago, writes in The Whys of a Philosophical Scrivener (1983): “Hartshorne’s writings are stimulating to read and seldom opaque, but I am always made uncomfortable by the fact that he seems to know so much more about God than I do.” Hartshorne was not oblivious to this criticism. In “Charles Hartshorne’s Letters to a Young Philosopher: 1979-1995” (2001) he explains:

Concerning M. Gardner and my knowing too much about God, what he, and so many, miss is that what I claim to know is very little. The mystery is not what extreme abstractions apply to God, but what the divine life concretely is, how God prehends you or me or Hitler, or the feelings of bats, ants, plant cells, atoms. The one “to whom all hearts are open” knows, or loves the concrete concretely. We know nothing in that way.

Without denying that we have knowledge of God based on rationalistic metaphysics, Hartshorne emphasizes that the extent of that knowledge is limited. For this reason, he took seriously the claims of mystics to have a direct and more adequate access to God than is available through intellectual reflection. He ends his discussion of mysticism, in “Mysticism and Rationalistic Metaphysics” (1980): “Possibly we need to devote more time to meditation and less (though at present it is no vast amount) to rationalistic metaphysics.”