The Ontological Argument and the Case for Theism

In 1955 Hartshorne left Chicago for Emory University in Atlanta. He traveled to Hawaii, the Philippines, Japan, and Taiwan in 1958. In 1962 he moved to the University of Texas at Austin. He visited India and Japan in 1966, Australia in 1974, Belgium in 1978, Japan and Hawaii in 1984, and England in 1988. At Emory and Texas he concentrated on defending his version of the ontological argument, developing his metaphysical system, reexamining the history of philosophy, and writing his autobiography.

Hartshorne’s best known but least understood work is his defense of the ontological argument. He probably wrote more on the subject than any other philosopher has; but despite his many remarks to the contrary, the supposition that he considered the argument to be a definitive proof of God’s existence, is widespread. The final chapter of his dissertation is devoted to the argument; two decades later he returned to it in the penultimate chapter of Man’s Vision of God and the Logic of Theism and in an article, “The Formal Validity and Real Significance of the Ontological Argument” (1944). In Philosophers Speak of God he distinguished two forms of the argument in Anselm’s work—seven years before Norman Malcolm made the same point in, “Anselm’s Ontological Arguments” (1960), an article that caused a minor stir among analytic philosophers. Hartshorne discussed Malcolm’s article in “The Logic of the Ontological Argument” (1961). In that same article he first formulated the ontological argument using the notation of modal logic. He gave a more elaborate formalization and defense of the argument in The Logic of Perfection and Other Essays in Neoclassical Metaphysics (1962). In Anselm’s Discovery: A Re-examination of the Ontological Argument for God’s Existence (1965) he defends Anselm’s second argument and gives detailed analyses of historical treatments of the argument. Finally, he presents it as part of a cumulative case for God’s existence in Creative Synthesis (1970). 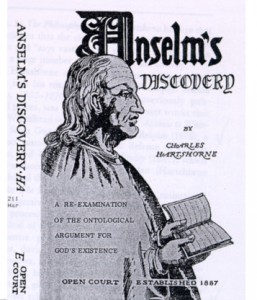 Hartshorne contends that Anselm discovered something important about the idea of deity: that any being that exists with the possibility of not existing (that is, contingently) cannot be God. Therefore, either God exists without the possibility of not existing or God cannot exist. In other words, God’s existence is either necessary or impossible: a contingent divine existence is a contradiction. It does not follow that God exists—one reason Hartshorne denied that the argument is a proof of God’s existence. The argument shows, however, that any argument for or against the existence of God that assumes that God is equally conceivable either as existent or nonexistent is fallacious. Thus, Hartshorne holds that the ontological argument is the key to the logic of any theistic or atheistic argument.

According to Hartshorne, the premise of the ontological argument that Anselm failed to justify is that God’s existence is not impossible. The medieval Scholastic John Duns Scotus and the German rationalist philosopher Gottfried Wilhelm Leibniz also made this criticism of Anselm. Philosophers as diverse as the logical positivists and the existentialist Jean-Paul Sartre have claimed that the concept of God involves some incoherence or contradiction. The concept of God to which they deny consistency, however, is that of classical theism; in that respect, Hartshorne agrees with them: “All my difficulty in believing in theism, all of it, turns on the not easily disproved suspicion that every available formulation of the idea of God involves some more or less well hidden absurdity.” But he argues that the panentheistic concept of God is not self-contradictory.

Some philosophers criticize Hartshorne’s ontological argument for equivocating on the modal concepts of necessity and possibility. For example, John Hick in “A Critique of the ‘Second Argument’” and David A. Pailin in God and the Processes of Reality claim that saying that God has always existed and always will exist (ontological necessity) is different from saying that the proposition “God exists” is necessarily true (logical necessity). Hick and Pailin, both theists, hold that God’s existence is ontologically but not logically necessary. Hartshorne replies that as far as the ontological argument is concerned, the difference between logical and ontological modalities is merely verbal: “Modal distinctions are ultimately coincident with temporal ones. The actual is the past, the possible is the future.” Thus, he refers to God’s “modal coincidence,” the idea that God’s existence is co-extensive with actuality and possibility.

Hartshorne does not believe that the ontological argument, by itself, is sufficient to make a convincing case for theism. For this purpose he employs what he calls “the global argument,” which consists of six mutually supportive arguments. In addition to the ontological argument, Hartshorne develops versions of the cosmological, design, epistemic, moral, and aesthetic arguments. The ontological argument is meant to show that God’s conceivability implies God’s existence; the other arguments are meant to show that God is conceivable. The global argument is prefigured in many of Hartshorne’s writings, beginning with the dissertation, but is fully presented only in Creative Synthesis and Philosophic Method (1970) and in Donald Viney’s Charles Hartshorne and the Existence of God (1985).

None of the elements of the global argument are “empirical” in the sense Karl Popper gave the term: that is, none of them presupposes that the proposition “God exists” could be falsified. Hartshorne makes clear in A Natural Theology for Our Time (1967) that the global argument is metaphysics, not science. The nearest historical parallel to Hartshorne’s argument is Duns Scotus’s De Primo Principio, but of course, Hartshorne denies Scotus’s classical theism. Moreover, Hartshorne does not claim to have demonstrated the existence of God—not long after publishing Creative Synthesis and Philosophic Method, he ceased to call the arguments proofs. Each of the arguments is presented as a logically exhaustive set of alternatives, one of which is panentheism; in each case, Hartshorne argues that panentheism is the most rationally defensible position. Disagreeing with him, he says, does not mean that one is irrational; one will have understood, however, the rational price to be paid by rejecting theism.

An objection to panentheism that has probably troubled Hartshorne more than any other comes from relativity physics. According to Einstein’s special theory of relativity, no single time-line exists for the entire universe. Temporal relations among events can only be fixed relative to an inertial reference frame. Two events may occur simultaneously in one frame of reference but successively in another frame of reference. The problem is that relativity physics does not permit one to say that any one reference frame is any more privileged than another. Therefore, the question whether the events are really simultaneous does not make sense. Without a single time-line for the universe what does it mean to say, as Hartshorne does, that there is a divine time?

Some hope for escaping the problem comes from quantum physics. According to Bell’s theorem (named for J. S. Bell), one event may influence another event before there is time for a light signal to traverse the distance between them. The importance of Bell’s theorem for Hartshorne’s theism is that it opens the possibility that, contrary to relativity physics, a single time-line for the universe does exist. At first Hartshorne greeted Bell’s Theorem with excitement as a possible way out of his difficulty. Later, in his reply to critics in Charles Hartshorne’s Concept of God: Philosophical and Theological Responses (1990) he said he knew “too little physics to be confident in such topics” and suggested that this is the kind of impasse in philosophical systems of which Jones had spoken.