The only form of immortality for creatures that Hartshorne admits is what Whitehead called “objective immortality.” God’s memory is the measure of the reality of the past. Hence, everything a creature has been, all of its joys and sorrows, achievements and failures, are preserved in the mind of God as objectively immortal. To want more than this sort of immortality, says Hartshorne, is to want to be God. Hartshorne’s counsel is to accept one’s fragmentariness, not to hope for a posthumous career but to find meaning by contributing to the divine whole of which one is a part. He calls this doctrine “contributionism.” In Wisdom as Moderation he says, “God’s possession of us is our final achievement, not our possession of God.”

Traditionally, the doctrine of personal survival of death played an important role in solving the problem of evil: the innocent who suffer unjustly in this life may be compensated in the next life. Hartshorne’s “objective immortality” provides no basis for this hope. Thus, some philosophers sympathetic to Hartshorne’s views, such as David Ray Griffin and Marjorie Suchocki, have explored ways of supplementing objective immortality with some form of personal survival of death. In Evil Revisited: Responses and Reconsiderations (1991) Griffin claims that a doctrine of an afterlife would help Hartshorne answer John Hick’s charge that process theology is elitist because the unfortunate and downtrodden of the earth may not believe that they can make a significant contribution to the divine life.

Hartshorne, however, frequently pointed out that the book of Job addresses the problem of evil without appeal to an afterlife. Furthermore, the tragedy inherent in multiple creativity cannot, in Hartshorne’s view, be rectified in an afterlife without eliminating freedom. Doctrines of the afterlife framed for the purposes of theodicy are elaborately orchestrated affairs in which God imposes a moral order that the creatures are too ignorant or too wicked to achieve for themselves. Hartshorne endorses Sigmund Freud’s observation that life is not a kindergarten. 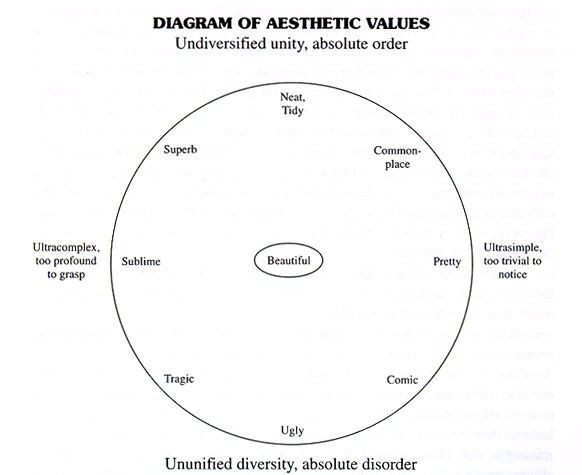 According to Hartshorne the most inclusive values are aesthetic. As Aristotle maintained that virtue is a mean between extremes, so Hartshorne says that beauty is a mean between the double extremes of order and disorder and complexity and simplicity. Too much order results in neatness, too little order in ugliness. Too much simplicity yields prettiness, too much complexity yields sublimity. Hartshorne notes that aesthetic sensibilities possess a certain relativity—one must always ask, “Too much or too little for whom?” A melody that is profound for a bird may be trivial to a human being. Nevertheless, Hartshorne maintains that every being’s sense of beauty preserves the basic contrasts. Hartshorne advocated a situation aesthetic, or what John Hospers calls “contextualism.” He summarized his aesthetic theory in Creative Synthesis and Philosophic Method in a circle diagram that Max Dessoir and Kay Davis helped him develop (Figure 2).

Hartshorne concedes that his aesthetic theory cannot easily accommodate some of the counter-examples that can be offered. For example, a simple melody may be of surpassing beauty; if one changes a note here or there it becomes merely mundane or even ugly. He resists, however, the facile relativism that says that aesthetic judgments lack any objective component; he denies that beauty is merely “in the eye of the beholder.” Furthermore, his work on sensation and ornithology made him sensitive to the biological and nonhuman dimensions of aesthetics that connect human beings to the world from which they evolved. Hartshorne’s theory provides aesthetic reasons—in addition to economic, ethical, and ecological ones—to oppose the wholesale destruction of the environment. In The Philosophy of Charles Hartshorne he says that he believes that the circle diagram survives most critiques and “says vastly more, almost at a glance, than even a large number of words alone can convey.”