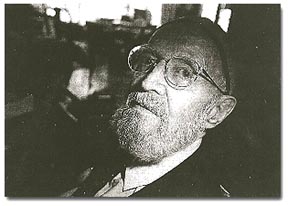 Charles Hartshorne was honored by The Library of Living Philosophers through having its twentieth volume be The Phdosophy of Charles Hartshorne. Prior works in this series have reckoned with the enduring contributions of Albert Einstein, John Dewey, George Santayana and Alfred North Whitehead. Figures from other nations include Bertrand Russell, Ernst Cassirer, Sarvapalli Radhakrishnan, Karl Jaspers, Jean-Paul Sartre, and Martin Buber. As is the custom of this honorific library, the Hartshorne volume contains a brief intellectual autobiography, critical appraisals of his work by his peers, his reply to them, and a bibliography of his 20 books and 498 articles.

Who is this great philosopher in our midst, and what is the new world view for which he is being highly honored? An article about him in the current Encyclopedia Britannica begins as follows: Hartshorne, Charles (b.June 5, 1897, Kittanning, Pa.,) U.S. philosopher, theologian, and educator known as the most influential proponent of ‘Process Philosophy,’ which considers God a participant in cosmic evolution.

Elsewhere the Britannica amplifies the above sentence by describing the history of both Eastern and Western systems of “pantheism and panentheism” in five pages, concluding as follows:

It was left to Charles Hartshorne to provide the definitive analysis of panentheism. It is Hartshorne’s suggestion that the organismic analogy, present in Whitehead as well as in many earlier thinkers, be taken seriously. For Hartshome, God includes the world even as an organism includes its cells, thus including the present moment of each event. The total organism gains from its constituents, even though the cells function with an appropriate degree of autonomy within the larger organism.

Panentheism is then a middle way between the denial of individual freedom and creativity characterizing many of the varieties of pantheism and the remoteness of the divine characterizing Classical Theism. Its support for the ideal of human freedom provides grounds for a positive appreciation of temporal process, while removing some of the ethical paradoxes confronting deterministic views. It supports the sacramental value of reverence for life. At the same time the theme of participation with the divine leads naturally to self-fulfillment as the goal of life.

The work of Charles Hartshorne, the Einstein of religious thought, is esteemed not only by some eminent secular scientists and philosophers but also by distinguished thinkers who are Protestant, Catholic, Jewish, Muslim, Hindu, and Buddhist. Nor is high esteem restricted to purely theoretical considerations divorced from urgent issues of life.

As early as half a century ago, Quincy Wright suggested in his now classic two volume A Study of War (1942) that Charles Hartshorne’s new philosophy of nature, described as theistic naturalism or naturalistic theism, is the type of religion needed for a peaceful world civilization if only humanity becomes less reluctant to accept the new and abandon the old than it has been in the past.

When I once did a Boston television interview with Charles and Dorothy Hartshorne, I invited Dorothy to summarize the gist of his philosophy, and she said:

Love is the guiding principle of all life….All living organisms have at least an infinitesimal amount of freedom and responsibility…. We can consider a human life as being like a story, with a beginning, a middle, and an end. When we close the book, the story does not disappear. It continues, and likewise our contribution to others becomes a part of God ’s life that goes on and on. That is how we best cope with tragedy and death.