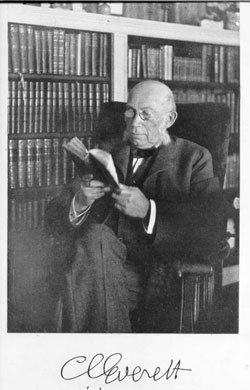 Charles Carroll Everett, D.D., LL.D., was born in Brunswick, Maine, June 19, 1829. He graduated at Bowdoin College in 1850, and in the following year entered upon the study of medicine. After a year spent in Europe he became a member of the Faculty of Bowdoin. To the duties of Professor of Modern Languages were added those of College Librarian. In 1857 he severed his connection with the college to prepare himself for the Unitarian ministry. He graduated from the Harvard Divinity School in 1869, and immediately began his work as minister in the Unitarian church of Bangor, Maine After a ten years’ pastorate he resigned to accept the appointment as Bussey Professor of Theology in the Harvard Divinity School, a position which he held till his death on October 16, 1900. The thirty-one years of service in the Divinity School, during the latter part of which he was Dean of the Divinity Faculty, was a period of growing influence.

The list of his books gives but a slight conception of his contributions to thought. While yet in Bangor, he had published his “Science of Thought.” In 1884 was published Fichte’s Science of Knowledge, in 1888 Poetry, Comedy, and Duty, in 1891 Ethics for Young People, in 1893 The Gospel of Paul. Some of his most characteristic work may be seen in articles contributed to the New World and other magazines and since his death collected in three volumes. In his lectures in the Divinity School he exhibited the originality of mind and freshness of spirit that made him one of the foremost leaders of religion in America. He entered upon his work at a time when formal theology was discredited. The foundations of the imposing systems had been undermined by the advance of the exact sciences. Dr. Everett did not attempt the futile task of formulating a “New Theology” which should simulate the completeness of the old. He came with a different temper and method. With rare detachment from the ordinary interests of theologians he approached the problems of religious speculation as a philosopher and a humanist. He allowed free play to his faculties, wit, humor, spiritual imagination. At the same time he ignored the traditional distinctions between the Christian world and that which lay outside. Religion, to his mind was no local phenomenon. He delighted in its manifold manifestations. He conceived of his work as having to do not with a formal argument, but with the natural history of the soul.

It was this quality of mind which enabled Dr. Everett to make a success of a new experiment in theological education. When he entered the Divinity Faculty, the School of Theology, while a part of the university, was recognized as being distinctly Unitarian. The denominational limitation was foreign to the university spirit, but it seemed inevitable. How could theology be taught save as the exposition of the peculiar tenets of some particular sect? It is not too much to say that, while the movement for an undenominational Divinity School was inevitable, its success was largely due to the genius of Dr. Everett.

Could theology be taught in such a way that men preparing for the ministry of different churches could, with profit, attend the same lectures? The answer to this question was given in Dr. Everett’s lecture-room. The answer was not one of compromise or expediency. The teacher revealed the regions of thought which lay beneath the controversies. A philosophy of religion was revealed. Dr. Everett’s teaching was in harmony with the university spirit in its disinterested search for truth. At the same time his own deeply religious spirit enabled him to sympathize with men of the most divergent creeds. Greater than any one form of religion was religion itself, as it was natural that he should be the first in the world to offer instruction in “Comparative Religion.”

Dr. Everett was not simply a philosopher, he was by natural gifts a man of letters. He was recognized during his lifetime by those interested in the subject as one of the wisest of American theologians. As dean of the Divinity School, he was loved and honored; but, if in a miscellaneous company it had been asked if there were any minds left like that of Oliver Wendell Holmes, it is not likely that any one would have thought of the quiet professor in Cambridge. Yet it is doubtful whether the humor of Dr. Holmes had a finer flavor than that of Dr. Everett. As for the ability to give great thoughts a worthy literary expression, when Emerson is excepted, it would be difficult to find his equal among the men of the Transcendental period. Of Dr. Everett it could be said, as of Lessing, that “his mind was always in solution.” Elements the most refractory were readily combined. The title of his little book of essays, Poetry, Comedy, and Duty, which has been a delight to a circle of appreciative readers, was characteristic. Comedy had for him a moral value. Even on the countenance of the “stern daughter of the voice of God” he could detect an illusive smile.

There is no sharp line of demarcation between Dr. Everett’s theological and literary essays, for in all his writing Dr. Everett had the rare faculty of seizing upon the points of real human interest. No matter what the theme, the charm of personality is felt. On every page there is some illuminating sentence with a flash of insight which has the effect of wit. Even a metaphysical idea is more apt to be described as one might describe the peculiarities of an interesting person than as if it were a word. Sometimes a whole argument is summed up in a swift descriptive phrase. His literary criticism was marked by the keenest discriminations, and his judgments were always the result of personal insight.

Perhaps no better evidence can be given of the richness of Dr. Everett’s nature than the impression which he made upon those who knew him of reserved power. He was capable of excellence in so many different ways. Dying at seventy-one years of age, his friends felt a loss like that which comes from the death of a youth of promise. There was the sense of intellectual and spiritual power which had not been exhausted.