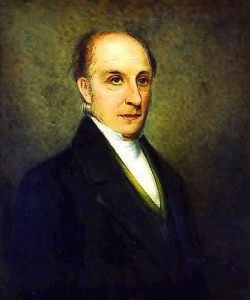 The American architect Charles Bulfinch was born in Boston, Massachusetts on August 8, 1763, the son of Thomas Bulfinch, a prominent and wealthy physician. He was educated at the Boston Latin School and at Harvard, where he graduated in 1781. After several years of travel and study in Europe, in 1787 he settled in Boston, where he was the first to practice as a professional architect. Among his early works were the old Federal Street theatre (1793), the first playhouse in New England, and the “new” State House (1798). He was chairman of the Board of Selectmen of Boston from 1797 to 1818. He provided for new systems of drainage and street-lighting, reorganizing the police and fire departments, and straightening and widening the streets. He was one of the promoters in 1787 of the voyage of the ship “Columbia,” which under command of Captain Robert Gray (1755-1806) was the first to carry the American flag round the world. In 1818 Bulfinch succeeded B. H. Latrobe (1764-1820) as architect of the National Capitol at Washington. He completed the unfinished wings and central portion, constructing the rotunda from plans of his own after suggestions of his predecessor, and designed the new western approach and portico. In 1830 he returned to Boston, where he died on April 15, 1844.