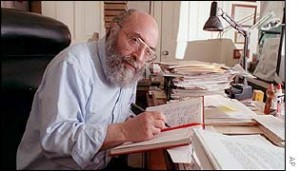 Chaim Potok is a rabbi and author whose novels depict the life and culture of Orthodox Jews. Potok’s works in the 1980s have been autobiographical. Throughout his publishing career Potok has written scholarly and popular articles and reviews. A central theme in Potok’s novels is the tension between Judaism and the values and culture of modern society.

Herman Harold Potok was born in New York City in the Bronx as the eldest son of Jewish immigrants from Poland. Potok received his M.A. in Hebrew literature. At the age of 25 he was ordained a Conservative rabbi. Between the years 1955 and 1957 he was a chaplain with the US Army, more than fifteen months of his service being in Korea with a front-line medical battalion and an engineering combat battalion. This experience provided material for Potok’s novels, The Book of Lights (1981) and I Am The Clay (1992).

As a novelist Potok made his debut with The Chosen (1967), a story about rivalry and friendship between a progressive Orthodox Jewish scholar and a young Hasid. The book became a best-seller. The novel was on The New York Times best-seller list for more than six months and was nominated for a National Book Award. Two years later, he published The Promise (1969). The book achieved a first printing of 100,000 copies.

My Name Is Asher Lev (1972) is the story of a young artist, whose choice of career is not approved by his family. Autobiographical In the Beginning (1975), about modern criticism of the Bible and tradition, The Book of Lights (1981), and Davita’s Harp (1985) explored the conflict between religious and secular interest. Among Potok’s non-fiction works is Chaim Potok’s History of the Jews (1978).

—Courtesy of Books and Writers

The Chosen by Chaim Potok