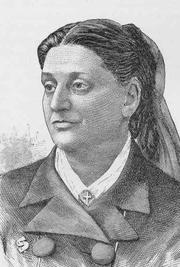 Known as the first Universalist missionary, Caroline Augusta White was born in Albany, New York on September 3, 1824. She was educated at the Albany Female Academy, and the year after graduation, she took charge of the women’s department at the Universalist-founded Clinton Liberal Institute. Being only seventeen, many of her students asked her to “wear a cap” so that she would look “more matronly.” At Clinton she met and later married the Rev. Henry B. Soule, who was head of the men’s department at Clinton. In the next few years Henry had a succession of pastorates in New England and New York. He contracted smallpox in 1852 and died, leaving Caroline a widow with five small children. She began to write in order to support herself, starting with a memoir of her husband. She published a number of stories in ladies magazines, including The Ladies Repository. After moving to Iowa in 1853, she published three books, the last a temperance story, Wine or Water (1862). After moving to New York, she became the founder and editor of a Sunday school paper, The Guiding Star, and she also edited the children’s section of The Christian Leader.

Raised a Universalist, Soule began to take a leadership role in the denomination. At the 1869 General Convention, she helped organize the Women’s Centenary Aid Association, which began as a short-term organization meant to raise an endowment for the denomination (including funds for needy ministers and their families, of which Soule had personal experience). Soule was its first president, and traveled extensively raising funds, lecturing, organizing and writing, and most especially mailing tracts all over the world to spread the Universalist message. Her efforts included the raising of funds for an endowed woman’s professorship at Buchtel College. Two years later the group was reorganized as the Women’s Centenary Association, the first national women’s organization in the United States, and she remained president for eleven years. Always suffering from poor health, she traveled to England and Scotland in 1875 to try to recuperate. But Soule plunged into denominational work there as well, and helped organize the Scottish Universalist Convention. By 1878 she became the first foreign missionary for the Universalists, being appointed by the Women’s Centenary Association. She became minister of St. Paul’s Universalist Church in Glasgow in 1879, and was ordained the following year. She remained there until her retirement in 1892. Soule continued to speak whenever she could, saying “fatigue in the cause of Universalism is infinitely better than inaction, apathy, indolence.” She died on December 6, 1903.