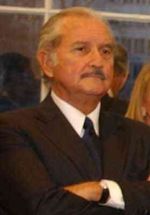 Carlos Fuentes is one of Latin America’s most prominent men of letters. He is an essayist and literary historian of the highest caliber, as well as the author of numerous screenplays, dramas, and short stories; however, Fuentes is best known for his novels, which use complex and innovative narrative techniques to probe Mexican history. Born in 1928 in Panama City, the son of a Mexican diplomat, Fuentes was raised in Washington, D.C. Buenos Aires, Argentina, and Santiago, Chile. He took a law degree from the National University of Mexico, and pursued graduate studies at the Institut des Hautes Études Internationales in Geneva.

Fuentes combined his life as a writer with a successful career in international relations that culminated in being appointed Mexico’s ambassador to France from 1975 to 1977. Since then he has been the Robert F. Kennedy Professor of Latin American Studies at Harvard University since 1987. He has received numerous literary awards, including the Cervantes Prize in 1987. Fuentes’ major works include: Where the Air is Clearer (1958); The Death of Artemio Cruz (1962); A Change of Skin (1967); Terra Nostra (1975); The Hydra Head (1978); The Old Gringo (1985); and The Campaign (1990).