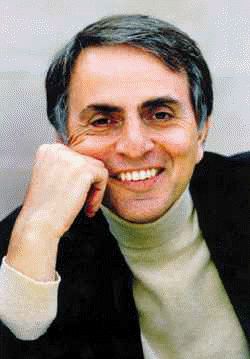 Carl Sagan was the David Duncan Professor of Astronomy and Space Sciences and Director of the Laboratory for Planetary Studies at Cornell University. He played a leading role in the Mariner, Viking, and Voyager spacecraft expeditions to the planets, for which he received the NASA Medals for Exceptional Scientific Achievement and (twice) for Distinguished Public Service. The Mazursky Award from the American Astronomical Society cites “his extraordinary contributions to the development of planetary science… As a scientist trained in both astronomy and biology, Dr. Sagan made seminal contributions to the study of planetary atmospheres, planetary surfaces, the history of the Earth, and exobiology. Many of the most productive planetary scientists working today are his present and former students and associates.”

His book Cosmos (accompanying his Emmy­ and Peabody-award-winning television series of the same name) was the best-selling science book ever published in the English language. His novel Contact is soon to be a major motion picture (Warner Bros.).

—Courtesy of the Pacific Network

Click here for supplemental reading about Carl Sagan on Amazon.