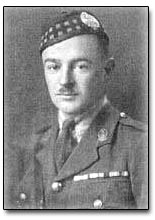 Brock Chisholm, 28th Highlanders of Canada, at the end of the First World War.

George Brock Chisholm, past moderator of the American Unitarian Association, was born on May 18, 1896 in Oakville Ontario. At the outbreak of the First World War, he joined the Canadian Army’s 15th battalion, in which he served as a cook, sniper, machine gunner, and scout. Chisholm’s leadership skills and cool demeanor under pressure brought him much acclaim, including a Military Cross for heroism at a battle outside of Lens, France.

In 1917, Chisholm returned to Canada a quasi-legend. Having attained the rank of captain and having added a bar to the Cross, he was already a quasi-legend. At this juncture in his life, he decided to pursue medicine, which had been his passion ever since his uncle had given him a toy doctor’s set when he was a boy. Furthermore, he had been fascinated by the unmitigated human emotion that was manifested in war.

Equipped with his M.D. from the University of Toronto, Chisholm specialized in psychiatry during an internship in England. He then went into general practice for six years. Beginning in 1931, he studied at the Yale School of Human Relations, where he concentrated on the mental health of children, concluding that, “Children must be free to think in all directions irrespective of the peculiar ideas of parents who often seal their children’s minds with preconceived prejudices and false concepts of past generations. Unless we are very careful, very careful indeed, and very conscientious, there is still great danger that our children may turn out to be the same kind of people we are.”

Chisholm inevitably earned a reputation as a controversial, unconventional speaker.

Soon thereafter, Chisholm once again involved himself in the affairs of the Canadian military, this time to study the psychological aspects of soldier training in the Second World War. He was named Brigadier Deputy Adjutant-General and rose to become Director General of the Medical Services of the Canadian Army. The Canadian Government, made aware of the importance of wellness by Chisholm’s efforts, created the Deputy Minister of Health position in 1944, which he immediately occupied.

Chisholm’s next act would be the largest undertaking of his life. He had participated in a technical planning committee for an international health conference. 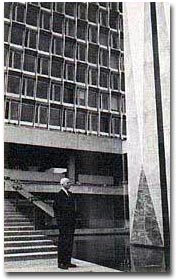 Dr. Brock Chisholm, first Director General of WHO, as an honorary guest at the 19th Assembly, visiting the new WHO headquarters building in Geneva.

Dr. Brock Chisholm, first Director General of WHO, as an honorary guest at the 19th Assembly, visiting the new WHO headquarters building in Geneva.

In July of 1946, he became the Executive Secretary of the Interim Commission of the World Health Organization, based in Geneva, Switzerland. The WHO became permanent in April of 1948, with Chisholm at the helm. He was now in a position to redefine the world’s definition of health. WHO stressed the idea that health has as much to do with mental wellness as with physical wellness. By extension, Chisholm maintained, the well-being of humanity depends on the emotional health of the world’s collective population.

WHO regulates disease nomenclature, sanitation, and quarantine. The organization was tested in 1947 by an Egyptian cholera outbreak. Relying on its stated preference for international solutions, the Interim Commission of WHO notified Egypt’s neighbors as to the best procedures to take in order to prevent the spread of the disease, including quarantine precautions. A vaccine was distributed efficiently to the people of the affected area.

Characteristically, Chisholm brought his message to a world audience by stating, “The world was sick, and the ills from which it was suffering were mainly due to the perversion of man, his inability to live at peace with himself. The microbe was no longer the main enemy; science was sufficiently advanced to be able to cope with it admirably. If it were not for such barriers as superstition, ignorance, religious intolerance, misery and poverty.”

Brock Chisholm was married to Grace McLean Ryrie on June 21, 1924, and they had two children, Catherine Anne and Brock Ryrie. Dr. Chisholm died on February 4, 1971, in Veterans’ Hospital, Victoria, Ontario.

TWO BILLION CALL HIM DOCTOR
Abridged from Maclean’s Magazine, May 1, 1950
by Robert Baker

Dr. Brock Chisholm once shocked a nation by saying there was no Santa Claus; now he needles a whole world into checking disease at its source.

Last fall the Canadian-born director-general of the World Health Organization (a United Nations agency) declared that seven ounces of high-powered germs would, if properly distributed, kill everyone on earth. The subsequent shockwave of headlines and military denials swept three times around the earth, yet Chisholm had simply used the alleged horrors of biological warfare to point up his long-held contention that if people don’t grow up in time to avoid another war there may be no people left.

He was the first psychiatrist ever to head the medical services of any army.

He was the only serious contender for the world’s top health job when WHO was organized, and he was elected 16-2 by the participating nations.

Whatever his secret, he has built up an amazing loyalty among those who have worked with him wherever he has gone. 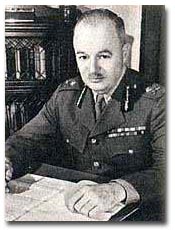 Supported by 62 of the United Nations, Chisholm’s WHO, in less than four years of activity: Killed a cholera epidemic in Egypt, Almost wiped out malaria in Greece and Sardinia, in large sections of which the disease once struck 80% of the people annually. Ringed the world with a daily, short-wave epidemic-warning service, so ships at sea and port quarantine officials may know instantly when smallpox, cholera and plague break out anywhere on earth. Dispatched TB X-ray crews to China; air-shipped iron lungs to India; trained natives for Ethiopia; sent American doctors to study VD control methods in Europe. Launched two long-term projects to standardize names, descriptions and strengths of all drugs throughout the world.

Leaving his office at 5 or later Brock Chisholm drives home around Lake Geneva in the car he took over from Canada (He doesn’t use the limousine and chauffeur at his disposal) to the 100-year-old white stone house the Chisholms purchased last year, set on the steep slope of an abandoned vineyard overlooking the lake. Here he is greeted by his wife, the former Grace Ryrie, who, with the aid of a cook and maid, is probably finishing preparations for a dinner party to up to 10 international visitors or a cock tail party for 100.

Entertaining is no small part of the director-general’s job and Grace Chisholm’s specialty is the old-fashioned Sunday evening buffet or pass-around supper, a Canadian institution which she has developed into a highly successful weapon of international diplomacy. She holds her buffets on weekdays (the Chisholms try to keep their week ends strictly for family relaxation) and finds that without extra help she can thus play hostess to 30 guests at a time. Dignified gentlemen who turn up in striped pants, burnooses or other formal regalia are amazed to be handed a plate and a fork and told to dig in. 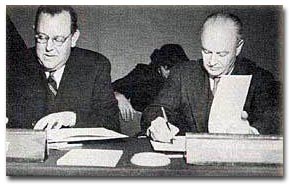 “Do you know where I ate my supper?” exclaimed one European diplomat to a friend on WHO’s Geneva staff. “On the floor! And do you know who was sitting beside me? Mrs. Chisholm!”

The WHO constitution has been hailed as revolutionary because it defines health as “a state of complete physical, mental and social well-being and not merely the absence of disease or infirmity”; because it declares such a state of health to be one of the fundamental rights of every human being; and because it recognizes that “the heath of all peoples is fundamental to the attainment of peace and security.”

Says Chisholm, the only real enemy man has left on earth is man himself. 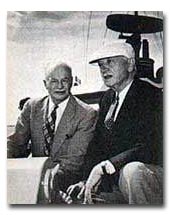 With Cyrus Eaton at the time of First Pugwash Conference in Pugwash, Nova Scotia, Canada.

“We have swallowed all manner of poisonous certainties,” Brock Chisholm has written, “fed us by our parents, our Sunday- and day-school teachers, our politicians, our priests, our newspapers and others with a vested interest in controlling us.” “You can only cure retail, but you can prevent wholesale,” he decided. “Instead of bringing our children up according to our own preconceived rules of ‘good’ and ‘bad’ (despite which we have stumbled into two world wars in one generation) we must teach them to question everything, he says. Tell your child you believe in God, point out that some people don’t.”

Give your children unquestioning love until they are four years old, Chisholm advises, tell them the simple truth about everything, encourage them to think things out for themselves, and you will set them upon the path to maturity. And not until we have enough mature persons to represent us in the United Nations—and enough more at home to back them up—can we hope to avoid self-annihilation.