Bernice Brown Cronkhite had tremendous impact on Radcliffe and its development, serving longer than any other senior officer from 1923 to 1959: 36 years—first as vice president and dean, later the first dean of the Graduate School—this on top of her years as an undergraduate and graduate student.

I knew her best when I became director in 1978 of the Cronkhite Graduate Center, which is at the corner of Brattle and Ash Streets. Bernice was then retired and in her mid 80’s. She would speak of the three ages of woman. You were young, middle-aged or truly remarkable. She was the latter as she continued to enjoy visiting the building, recalling how it came into being, occasionally meeting with resident students, who found her greatly to be admired. She was always poised, in command of a situation with a ready anecdote and a fund of well informed conversation. 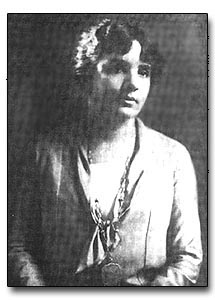 My earliest recollection of her goes back to the summer of ’38—the year of the hurricane. She was then dean of the Graduate School. Her office was next to admissions where I typed form letters—an interim job after my own June graduation and a chance to improve my shaky typing. Memories are of a fashionably dressed and dignified lady rushing to appointments or picking up a speech someone more accomplished than I had typed. A graduate of the class of 1916, she became dean and vice president partly as a result of a chance meeting with Ada Comstock. They were in a train en route to an American Association of University Women meeting in Burlington, VT. Miss Comstock was dean of Smith College at the time. When she was appointed Radcliffe’s third president in 1923, she chose Bernice as dean.

Bernice had abundant credentials, with a Ph.D. in international law, a year of study in Brussels under a distinguished professor of international law, and a year at Yale Law School which helped her prepare for the graduate degree. Incidentally, she was the Belgian professor’s first woman student; and as she points out in her memoir The Times of My Life, “Yale Law School had never admitted women, but they decided to admit me.” Another year abroad on fellowship gave her the opportunity to attend early meetings of the League of Nations in Paris and later in Geneva when that became League Headquarters. She greatly regretted that the US never joined the League. On her return, she worked for a time for the Boston Women’s Municipal League, which trained women for Civil Service jobs.

Bernice was a scholar and administrator and also a woman who loved stylish clothes. She found that when she was in Paris, she could pick up courtier designs for a song after they had been on view at twice a year fashion shows. She was also fond of interior decorating and landscape design at her homes in Cambridge and Harvard, Massachusetts. She once told me that, as a child, her father had given her a free hand in planning her own room. Years and years later when I visited her for tea at her Concord apartment at 5 Concord Ave., I discovered that she changed the look of her living room each summer, covering furniture upholstery with light slip colors. Another example of this interest was the garden at the corner of Appian Way and Garden Street. While perhaps not as lovely as it used to be, remains a pleasant oasis today. 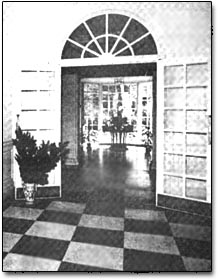 Lobby of the Graduate Center.

During her busy life as dean, she met Leonard Cronkhite, who became chairman of Atomic Instruments in Cambridge, when both served on a committee to set up arrangements for an exchange between American and British students. They were married in 1933. When Leonard was still courting Bernice, I remember a mutual friend’s telling me that when she and Bernice were on a trip together, Leonard pursued her with red roses at strategic overnight stops much to the envy of my friend, Priscilla Gough Treat, a long time member of the First Parish in Cambridge.

Mrs. Cronkhite’s dream as graduate dean was a residence for women graduate students who often had lonely lives in cramped and unattractive apartments. She promoted her cause with vigor, and Radcliffe owned land on Ash Street became the site of the Graduate Center. The cornerstone was laid in 1955, and the dedication took place the following year. When I was director of the Center from ’78-’82, men were also residents. Radcliffe seminars and public procedures programs had their headquarters there, and countless meetings, conference and social events filled the attractive first floor rooms.

One day just at noon when the usual luncheon crowd was milling about, the fire alarm went off. Most people thought it just a drill. Lots of fire engines arrived. I was worried because Mrs. Cronkhite happened to be there at the time. Fortunately, the firemen, with help from our janitor, discovered the cause and dealt with the fire without too much commotion. Apparently a mattress in a student room on the floor next to a faulty electrical outlet had been smoldering and caught fire. I don’t recall whether Mrs. Cronkhite was aware of the entire episode.

Another memory of those years illustrates the continuing tension between Radcliffe and Harvard, even though relationships had become increasingly intertwined. Mrs. Cronkhite had gone to New York to accept an honor of some sort and was staying at the Harvard Club. When she went down to breakfast, she was told — in no uncertain terms — women were not served at breakfast, but room service would be happy to bring breakfast to her room. She agreed reluctantly. I believe that not long thereafter the rules changed. During this same period we discovered we had the same University Health Services doctor. Her resilience and ability to bounce back after illness continually amazed him. 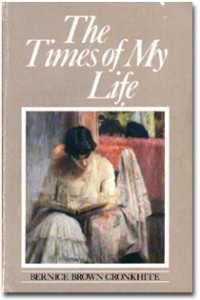 And then I remember being particularly grateful for a hotel she recommended in Madrid across the street from the Prado Museum. It was most convenient and lots cheaper than the Ritz, a few blocks away.

These are just a few glimpses of Bernice Cronkhite. She held national and international appointments, knew scores of people in the academic world and beyond—Henry Ford, for instance, diplomats and former students who established distinguished careers. Perhaps one of her most unexpected friendships was with a gypsy called Nation who first came to help with housekeeping at 5 Concord Ave. Early on, Nation Cooper disclosed that because of her gypsy upbringing she had never been to school, could not read or write. Bernice proceeded to teach her, found her efficient and intelligent. They became lifelong friends. Bernice Cronkhite genuinely liked people, reached out to them in ways that made a difference, helping them establish enduring connections and creating for herself a life full of joy and friendships.

— By Barbara Norton, Former Director of the Radcliffe Alumni Association

My brother and I grew up in an age when most American families were church-going; children went to Sunday School and at 13 or 14 joined the Church. We were familiar with most of the Bible stories although I do not think I could ever recite in correct order all the Books of the Bible. I had at least some acquaintance with its great figures and I knew some passages by heart and many hymns. My generation was perhaps the last of which this could be said. The increase in automobiles to take people out of the city on Sunday, the growing popularity of Sunday sports and Sunday newspapers meant that fewer and fewer children went to Sunday School … I do not remember that our public school day was opened with prayer — I think not—the salute to the flag was our opening ritual. We understood that the story of Genesis was a “Bible story” not to be taken literally. We did not question the virgin birth or Easter. We believed that man descended from monkeys by a process of evolution reaching over unimaginable ages; certainly the monkeys we saw in the zoo looked and acted very much like us. If we thought of death and the hereafter at all it was in the belief that death was not the end. I remember believing that God was everywhere and knew everything I might think or do, good or bad.

I do not remember meeting any Unitarians in my growing-up years—we belonged to a Baptist church, but I found that Louise Jackson and many of my friends at college were Unitarians. My very good friend and classmate, Margery Brown from Philadelphia, proved to be a Unitarian so we went together to the Unitarian (First Parish) Church in Harvard Square. It had been founded in 1632 and had counted among its members President Charles William Eliot, Mrs. Louis Agassiz and many of my professors. The minister from 1894 to 1927 was Samuel McCord Crothers, a gifted and lovable man. He not only preached sermons I enjoyed, but his warm and hospitable wife gave Sunday evening “at homes” to which I greatly enjoyed going. If more students turned up than had been expected, Mrs. Crothers would whisper to me, “Would you mind going into the kitchen and cutting the sandwiches in two?”

The Unitarian Church with headquarters in Boston, I discovered, was a small group, compared with the Catholics, Baptists and Methodists. It had no creed but on the wall behind the pulpit at First Parish in Cambridge had been lettered the words from Micah, “What doth the Lord require of thee but to do justly, to love mercy, and to walk humbly with thy God?” That seemed to me the sort of religion I wanted to follow and from then on I have been a member of the Unitarian Fellowship. Margery Brown and I both taught at the Unitarian Sunday School at First Parish.

I have always liked the Hindu statement—“There is one God though he is known by many names.” I have found no difficulty in praying to God in a Burmese Temple, a Shinto Shrine or a Catholic Cathedral. I believe in a God of Love, and that all human beings, whatever their creed or race or color, are “children of God.” To quote an ancient prayer, I have always tried “to see the face of my Maker in every face I have met on earth.” As to the hereafter, I often quote a line of one of Radcliffe’s earliest poets, Abbie Farwell Brown, “Why should I fear to fall into the hand of Him who made the rose?”