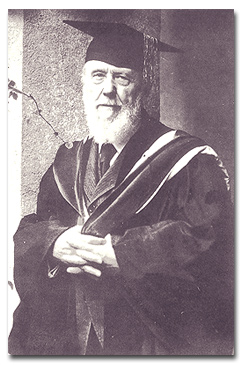 Born in New York City on February 7, 1862 to German immigrants who had come to America slightly more than a decade earlier, Bernard Ralph Maybeck (1862-1957) grew up in a family circle that encouraged him to draw and paint. He studied at the Deutsche-Americanische Schule and the Benjamin Franklin School in New York, learning both French and German before entering the college of the City of New York.

Before graduating, he entered his father’s trade of high quality wood carving, but he found designing more exciting than the details of production. His father arranged for him to study in Paris at the studio of one of the two partners who owned the custom furniture and architectural carving business where the senior Maybeck worked.

Bernard Maybeck was 19 when he arrived in Paris. The École des Beaux-Arts was near the studio, and Maybeck decided to become an architect. Although his training seemed inadequate, his high scores on the entrance examination gained him admission in 1882 in the atelier of Jules André, elected as one of the forty members of the Institut de France.

After completing all the work required for the diplomé (although as a foreign student he was not eligible to receive this distinction, a regulation that was lifted a year later), he returned to the U.S. in 1886. In New York he began his career with the new partnership of John Mervyn Carrère and Thomas Hastings, both of whom had been students at the École, the latter being Maybeck’s roommate in Paris.

For Carrère and Hastings, Maybeck worked on aspects of Henry Flagler’s Hotel Ponce de Leon in St. Augustine, Florida, a lavish structure in a romantic Spanish Renaissance style. Because Maybeck favored medieval design as his inspiration rather than the classicism of Carrère and also recognized that he was not likely to become a partner in Carrère and Hastings, he moved to Kansas City in 1889. It was there that he entered his first competition, one held for the design of the St. Louis City Hall. 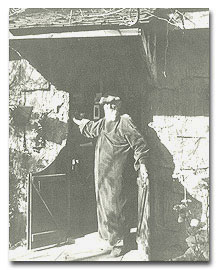 Maybeck in front of his studio in Berkeley, wearing a red velvet robe of his own design

Finding opportunities limited in Kansas City, Maybeck left for San Francisco, returning to Kansas City late in October, 1890 to marry Annie White with whom he returned to California to make his lifelong home. Eventually he found work in the office of A. Page Brown, whose commissions included the California building at the Chicago World’s Fair of 1893. Maybeck supervised its construction and had an opportunity to see the Fair’s other buildings and its formal layout, which he admired.

The Maybecks moved to Berkeley in 1892, and two years later Maybeck became an instructor in drawing in the Civil Engineering College at the University of California. Along with his other duties, Maybeck taught an independent course in architecture. He also taught at the Mark Hopkins Institute of Art in San Francisco where he became director of the architectural section. Then, after a European tour he became Instructor in Architecture at the university, the first such position and one he held from 1898 until he resigned in 1903. Among his students were Harvey Wiley Corbett and Julia Morgan.

In 1895 Phoebe Apperson Hearst indicated her desire to donate funds to the university for a mining building that would commemorate her husband, who had made his fortune in that occupation. To Maybeck, the sole architect employed by the university, fell the task of preparing a sketch for the building, a rendering that Mrs. Hearst approved. This led Maybeck to urge that the university prepare a campus development plan. The Board of Regent’s initial negative reaction gave way before Mrs. Hearst’s endorsement of the idea. She asked that Maybeck be given a two-year leave to act as professional advisor for an international competition to select the best design, the prizes to be donated by her. In 1896 Maybeck published a sketch of his own to illustrate the kind of approach that might be followed, although, as advisor he could not become a competitor.

One passage in the prospectus for the competition that the Regents issued reflects Maybeck’s thinking, if he did not actually write it: 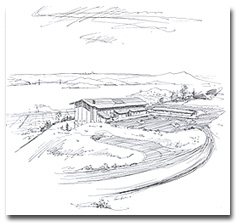 The expanison of the Univeristy of California forced the Berkeley Unitarian Church to relocate. A new church was built under the leadership of Rev. J. Raymond Cope on land donated by Maybeck.

“The University is a city that is to be created—City of Learning—in which there is to be no sordid or inharmonious feature. There are to be no definite limitations of cost, materials or style. All is to be left to the unfettered discretion of the designer. He is asked to record his conception of an ideal home for a university, assuming time and resources to be unlimited. He is to plan for centuries to come. There will doubtless be developments of science in the future that will impose new duties on the University, and require alterations in the detailed arrangement of its buildings, but it is believed to be possible to secure a comprehensive plan in harmony with the universal principles of architectural art.”

Maybeck and his wife left for Europe in 1897 to arrange the details of the preliminary round of the competition and to select the jurors. By the time the preliminary judging took place in Antwerp, 105 entries had been received. From these, the international jury selected eleven finalists who came to Berkeley at the expense of Mrs. Hearst to see the site. In 1899 the first prize went to Emile Bénard of Paris for his formal design, but when Bénard declined the position of Supervising Architect, John Galen Howard, winner of fourth-place was appointed to guide the growth of the campus.

Maybeck established his architectural office in San Francisco and began a practice that concentrated on the design of private homes, churches, and club buildings. Most of his over two hundred commissions demonstrate Maybeck’s originality and his refusal to follow conventional ideas of how a building should appear.

Work was not always forthcoming, and he entered several competitions. In 1911 Maybeck entered two competitions. One was for the design of the San Francisco City Hall, the other for a courthouse in Dayton, Nevada, but his entries did not win prizes. Needing money, Maybeck worked for Willis Polk, and it was his design for Polk of the Palace of Fine Arts for the Panama-Pacific International Exposition of 1913 that led to his appointment as its architect. 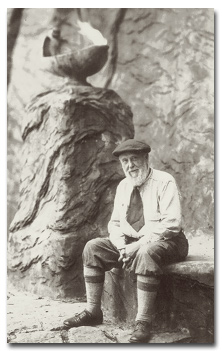 Except for his involvement with the campus planning competition for the University of California, Maybeck had no recorded experience in large-scale planning prior to the Canberra competition for design of a Federal City for the Commonwealth of Australia. He did influence the development of his own neighborhood in Berkeley with recommendations for how houses should be fitted into the steep hillsides, and in the 1906-07 bulletin of the neighborhood association, a dozen of his illustrations show how this could best be done.

In 1913 J. L. Brookings retained Maybeck to design “some housing and community buildings” for his lumber mill employees in Oregon. Maybeck produced a town plan as well as drawings for grouped housing, a hotel, and other buildings but except for the hotel this project died. His other town plan was for Clyde, a shipbuilding community projected during World War I on a site on San Francisco Bay. In this case, Maybeck was called on to review and modify a design already prepared. Today the place consists of three residential streets.

His later experiences in large scale design were for college campus plans, first for Mills College in 1918 and then for Principia College. For the latter institution he prepared two designs, each with variations. The first was for its site in St. Louis, Missouri between 1923 and 1930 and the second for a new site in Elsah, Illinois in 1930-38.

In 1937 Maybeck became associate architect for the Golden Gate International Exposition in San Francisco, and he also served as a member of the Berkeley, California city planning commission. In 1951 the American Institute of Architects awarded him its Gold Medal, and he also received honorary degrees from Mills College and the University of California.

The Palace of Fine Arts 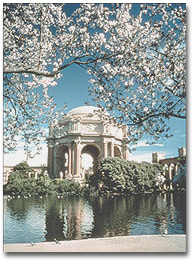 Among various indications of the living art of Bernard Maybeck we find the three dozen cherished residences in the Berkeley hills. His simple shingled design of the Unitarian Church of Palo Alto has been celebrated for the mystical atmosphere which he achieved. When the Unitarian Church of Berkeley was forced to move from the University of California campus, he not only recommmended the large site with a Bay view but gave a generous gift to make its purchase possible.

Most honored now among his achievements as a California architect is the Palace of Fine Arts in San Francsico which houses the Exploratorium, a unique educational center which features exhibits of science, art, and human perception. 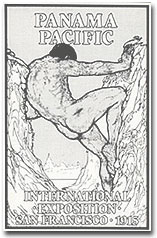 The task of creating a Palace of Fine Arts for the 1915 Panama-Pacific International Exposition fell to the architect Bernard R. Maybeck, then fifty years old and known for his innovative ideas. Setting to work on this new project, he chose as his theme a Roman ruin, mutilated and overgrown, in the mood of a Piranesi engraving. But this ruin was not to exist solely for itself to show “the mortality of grandeur and the vanity of human wishes.” Although it was meant to give delight by its exterior beauty, its purpose was also to offer all visitors a stimulating experience within doors.

In playing host to the Panama-Pacific International Exposition, the Fair, which opened on February 20, 1915, San Francisco was honoring the discovery of the Pacific Ocean and the completion of the Panama Canal; it was also celebrating its own resurrection after the shattering earthquake and fire of 1906.

The problems of choosing the exact site in the city had finally been overcome and groundwork had been going on for some time. Last of the buildings to be erected, on the lagoon and close by a group of Monterey cypresses, was Maybeck’s Palace of Fine Arts. With its exhibition hall to house the work of living artists (dominated by the Impressionists), its colonnade, and its rotunda—plans for all of which had dazzled the Commissioners when the huge brown-paper sketch was put before them—it fulfilled the architect’s dream: it was as beautiful reflected in the water as it was against the sky. And when the Palace was completed (Roman in style although a freely-interpreted, purely romantic conception, and Greek in decorative treatment) its exceptional harmony gave it instant appeal to the public.

— By M. H. White and Profesor Charles Gilman Hyde, from typescript in the Documents Collection, College of Environmental Design, University of California, Berkeley.