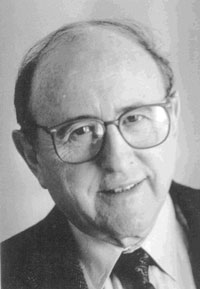 Mr. C. was a chipper Scotsman with a love for life and a chronic heart condition that was killing him. Every two weeks—always in the middle of the night—Mr. C.’s heart would race wildly out of control.

His doctor—a 37-year-old medical professor who later developed the direct current (DC) defibrillator that has become a lifesaving device worldwide—would speed to the hospital and bring Mr. C back to life.

Lown’s quest was to seek among the infinite number of electrical wave forms for the one form that would be safe, if indeed it existed. “It took a year’s intense work, morning, noon and night,” he recalled. After meticulous laboratory trials, Lown discovered a single direct current (DC) pulse in wave form that was safe. The shock momentarily stopped the heart and allowed its natural pacemaker to reestablish a normal heartbeat.

The technique soon spread like wildfire. By enabling surgeons to restore the arrested heart safely, the DC defibrillator made modern cardiac surgery possible. The organization of coronary care units was stimulated by it. And most of all, it enabled the resuscitation of hundreds of thousands of people.

Lown is also a teacher interested in public health policy. In 1960, he was one of the founders of Physicians for Social Responsibility, and in 1980, the co-founder of International Physicians for the Prevention of Nuclear War. He and a Russian colleague received the Nobel Peace Prize on behalf of the organization in 1985.

Where does the doctor’s prodigious energy come from?

Born in Lithuania, Lown emigrated to Lewiston, Maine, in 1935 at age 13. He barely avoided the Holocaust, which destroyed much of his family. “My grandfather, a rabbi, perished, burned alive in his own synagogue.”

—Adapted from The Harvard University Gazette

Click here for supplemental reading about Bernard Lown on Amazon.