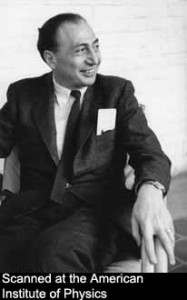 Dr. Bernard T. Feld, an emeritus professor of physics at the Massachusetts Institute of Technology who helped usher in the atomic era as an assistant to Enrico Fermi, then became a leading voice for nuclear disarmament for nearly half a century.

Dr. Feld was a graduate student and teaching assistant to physicists Fermi and Isador I. Rabi at Columbia University when he was given the opportunity to assist Fermi and physicist Leo Szilard in their efforts to produce a self-sustaining nuclear chain reaction.

In 1941 he suspended his graduate studies to join Fermi and Szilard at the University of Chicago, where the first controlled nuclear chain reaction was achieved in the Metallurgical Laboratory on December 2, 1942.

He was appointed an instructor in physics at MIT in 1946, but before taking up his duties he spent six months in Washington, D.C. where he and other leading physicists were lobbying against military control of nuclear research and weapons development. The result was legislation setting up the civilian Atomic Energy Agency. It was the beginning of a lifelong commitment to peaceful uses of atomic power and to ending the threat of nuclear war.

Dr. Feld was president of the Council for a Liveable World and the Albert Einstein Peace Foundation and editor of the Bulletin of Atomic Scientists. The Bulletin printed the “doomsday clock,” a symbolic representation of how close the world was, in the magazine’s opinion, to nuclear war.”

He was especially proud, according to colleagues, to be on Richard Nixon’s “enemies list.”