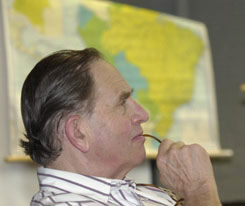 Bernard Bailyn, whose historical work centers on early American history, the American Revolution, and the Anglo-American world in the pre-industrial era, is Adams University Professor and James Duncan Phillips Professor of Early American History,emeritus, at Harvard University. He also serves as a Senior Fellow in the Society of Fellows and is the Director of the International Seminar on the History of the Atlantic World.

Professor Bailyn has taught at Harvard since 1953, becoming Professor in 1961 and Winthrop Professor of History in 1966, a position he held until 1981, when he became the first Adams University Professor. He served as editor-n-chief of the John Harvard Library from 1962 to 1970, as co-editor of the journal Perspectives in American History, 1967-77, 1984-86, and as Director of the Charles Warren Center for Studies in American History, 1983-1994.

The Ideological Origins of the American Revolution