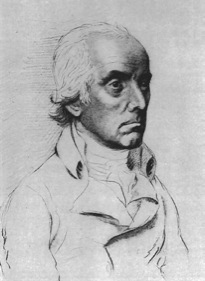 Benjamin Rush, signer of America’s Declaration of Independence, was born on January 4, 1746, in Byberry Township, Pennsylvania, the son of a farmer and gunsmith. His father died when he was five and his mother supported the family by running a grocery store.

In 1759, Benjamin Rush entered Princeton and received the A.B. degree in 1760 at the age of fourteen. After college, he returned to Philadelphia where he apprenticed under some of the most prominent American physicians of the time including John Redman. In 1766, at Redman’s urging, Rush left North America to continue his medical education at the University of Edinburgh. He received his medical degree in 1768, writing his thesis “On the Digestion of Food in the Stomach.” After medical school, Rush trained at St. Thomas’s Hospital in London. While in London, he met Benjamin Franklin. In 1769, Rush returned to Philadelphia and began practicing medicine. The College of Philadelphia appointed him professor of chemistry, the first native-born American to hold such a professorship. Soon after, Rush published the first American chemistry textbook. In Philadelphia, Rush was elected to the American Philosophical Society; he would eventually serve as its vice-president.

In 1775, Benjamin Rush was elected a member of the Second Continental Congress. As a delegate, Rush spoke in favor of America’s independence from Britain and signed the Declaration of Independence. In January 1776, he married Julia Stockton, thirteen years his junior. They would go on to have thirteen children.

After the work of the continental congress concluded, Rush left politics and returned to medicine. In 1787, he became a professor of theory and the practice of medicine and chair of the Institutes of Medicine and Clinical Practice, Theory and Practice of Medicine at the newly formed University of Pennsylvania. Rush promoted inoculation against smallpox and was an early advocate of preventive medicine and the simplification of the diagnosis and treatment of disease. His work at the University of Pennsylvania established the reputation of Philadelphia as a center of medicine.

From 1797 to 1813, Rush returned to government service and served as treasurer of the US Mint.

In 1812, a year before his death, Rush published Medical Inquiries and Observations upon the Diseases of the Mind, one of the first important American works on psychiatry. Consequently, he is remembered as the “father of psychiatry.”

Benjamin Rush, “the versatile and distinguished Philadelphian – physician, writer, humanitarian,” was an articulate Universalist. “Almost every Universalist social reform impulse from anti-slavery, temperance, and prison reform in the pre-Civil War era to participation in the Social Gospel movement of the late nineteenth century can be traced to Rush’s influence.” He saw Universalism as a major vehicle for establishing both religious and political equality in the new United States and this inspired him to be a social reformer.

Benjamin Rush spoke out early against slavery and the slave trade. In 1784, he became a organizer and later president of the Pennsylvania Society for Promoting the Abolition of Slavery, and Relief of Free Negroes Unlawfully Held in Bondage, and for Improving the Condition of the African Race, the revived Quaker anti-slavery society. 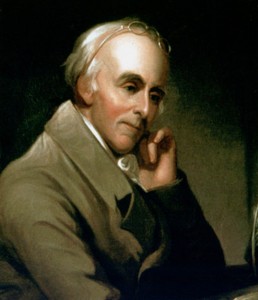 Before the women’s rights movement gained steam in the mid to late nineteenth century, Rush was calling for more extensive educational opportunities for women. In 1787, he published Thoughts on Female Education while serving on the all-male board of visitors of the Ladies’ Academy in Philadelphia. Rush helped found Dickinson College and Franklin and Marshall College. He campaigned to make public schools free and create a national university.

Rush was friends with a number of prominent Universalist and Unitarians including John Murray, his wife Judith Sargent Murray, and Joseph Priestley. Rush was also a friend of Thomas Jefferson and they held private conservations about religion.

In 1813, Rush, the first American physician to become widely known at home and abroad, fell ill with a fever and died five days later on April 19 in Philadelphia. He was eulogized by Thomas Jefferson and John Adams and is buried in the graveyard of Christ’s Church in Philadelphia. “Another of our friends of seventy-six is gone, my dear Sir, another of the co-signers of the Independence of our country,” eulogized John Adams, “And a better man than Rush could not have left us, more benevolent, more learned, of finer genius, or more honest. I know of no Character living or dead who has done more real good in America.”

— Excerpted from The Larger Hope: The First Century of the Universalist Church in America, 1770-1870 by Russell E. Miller

A Gallery of Photos Depicting the Life of Benjamin Rush 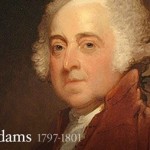 Rush was friends with a number of prominent Universalists and Unitarians including John Murray. 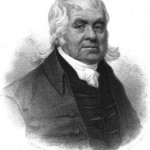 Benjamin Rush was friends with a number of prominent Universalists and Unitarians including Joseph Priestley. 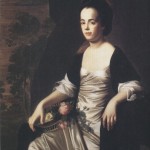 Benjamin Rush was friends with a number of prominent Universalists and Unitarians including Judith Sargent Murray. 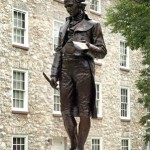 A statue of Benjamin Rush on the campus of Dickinson College. 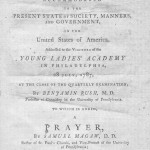 Benjamin Rush called for more extensive educational opportunities for women. In 1787, he published Thoughts on the Female Education. 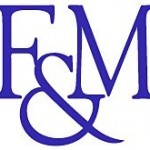 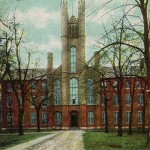 A photo of Franklin and Marshall College in Lancaster, Pennsylvania. Benjamin Rush helped found the College. 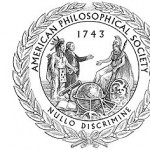 Benjamin Rush was elected to the American Philosophical Society and served as its vice-president. 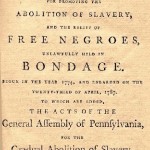 In 1784, Benjamin Rush became an organizer and later president of the Pennsylvania Society for Promoting the Abolition of Slavery and the Relief of Free Negroes Unlawfully Held in Bondage. He spoke out early against slavery. 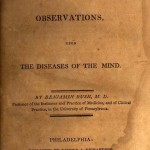 In 1812, a year before his death, Benjamin Rush published Medical Inquiries and Observations upon the Diseases of the Mind, one of the first important American works on psychiatry. He is remembered as the “father of psychiatry.” 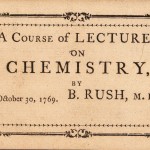 Benjamin Rush’s courses on medicine were the some of the most popular at the University. Benjamin Rush is well remembered as a dedicated teacher. 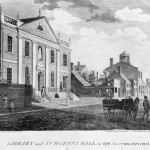 The University of Pennsylvania during the time of Benjamin Rush. Rush’s work at the University established the reputation of Philadelphia as a center of medicine. 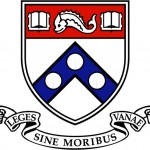 The shield of the University of Pennsylvania where Benjamin Rush was on faculty. 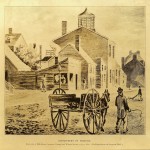 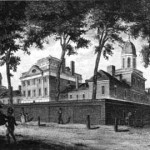 The College of Philadelphia where Benjamin Rush began his academic career. The College appointed him professor of chemistry and Rush went on to publish the first American chemistry textbook. 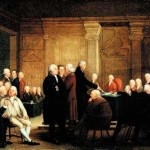 Benjamin Rush’s signature. Benjamin Rush was a signatory to the Declaration of Independence and participated in the Constitutional Convention in 1787. 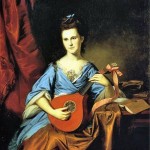 Pictured above is Julia Rush. In January 1776, Benjamin Rush married Julia Stockton, thirteen years his junior. They would go on to have thirteen children. 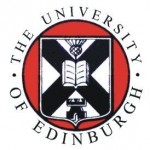 After college, Benjamin Rush left North America in 1766 to continue his education at the University of Edinburgh in Scotland. 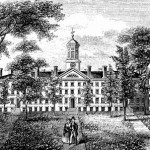 In 1759, Benjamin Rush entered Princeton and received the A.B. degree in 1760 at the age of fourteen. Above is a picture of Princeton’s Nassau Hall during the time Rush would have studied there.

The Autobiography of Benjamin Rush

A Brief History of the Universalist Church for Young People, by L. B. Fisher