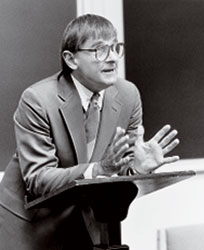 Dr. Benjamin DeMott, professor emeritus of English at Amherst College, was “a great scholar, teacher, and public intellectual in the best tradition of a liberal arts college,” Anthony Marx, the president of Amherst College, said in a statement.

In an age of ever-increasing academic specialization, Dr. DeMott was proudly uncategorizable. He held a doctorate in English from Harvard University and his field was 17th-century literature. But among his dozen books the two most representative titles might be Hells and Benefits: A Report on American Minds, Matters, & Possibilities (1962) and You Don’t Say: Studies of Modern American Inhibition (1966).

Dr. DeMott published two novels; book-length studies of race, class, and gender in contemporary America; and numerous essays and reviews for publications, including The Atlantic Monthly, Harper’s, Esquire, and The New York Review of Books.

“He had a particularly acute and original and free-spirited mind,” Robert Silvers, coeditor of The New York Review, said. “He had a very wide-ranging sense of life, whether education, sports, fiction. He had very strong values having to do with honesty, with appreciation of variety, with courage in civil life, and he was a very eloquent writer.”

Dr. DeMott was a rare academic who placed equal emphasis on teaching and writing. He was long a fixture on the Amherst campus. Among the students he taught were Nobel Prize laureate and cancer researcher Harold Varmus and book editor Richard Todd.

“A great teacher,” Todd said. “He was an immensely gifted lecturer and such a charismatic presence in the classroom. He always looked as though he’d just gotten of the train from New York—which he had! That was part of his attraction. He was both in and out of the academic world.”

In addition to his teaching and writing, Dr. DeMott served in a number of influential cultural positions. He was for many years on the board of the John Simon Guggenheim Memorial Foundation and in 1989 chaired the fiction jury for the National Book Award. He was also a talented pianist who considered a professional career in music when he was in his teens. As Dr. DeMott’s daughter Joel, of Montgomery, Ala., described it, “Billie Holiday’s manager once grabbed him by his necktie, literally, and said, ‘Kid, you could be making a living playing the piano.’ The manager gave him a new necktie, and we still have it.”

—Courtesy of The Boston Globe

The Trouble with Friendship: Why Americans Can’t Think Straight About Race by Benjamin DeMott (1998)