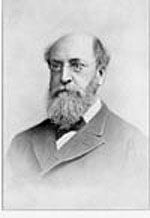 Dr. Benjamin Apthorp Gould, born in Boston, was the first American to obtain a Ph.D in Astronomy from Germany (Göttingen). His commitment to professionalize American astronomy included the founding and editing of The Astronomical Journal beginning in 1849.

While now celebrated primarily for his enormous accomplishment of mapping thirty-two thousand stars of the Southern Heavens, Gould also made the first determinations of the trans-Atlantic latitudes by telegraph; organized meteorological stations from the tropics to Tierra del Fuego and from the Andes to the Atlantic; pioneered in the use of the camera as an instrument of precision; and was one of the founders of the National Academy of Sciences.