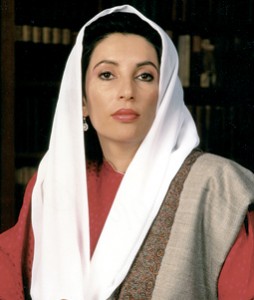 When audiences around the globe hear Benazir Bhutto’s dramatic story of democracy and deposal, they are awed by the tireless strength with which she struggles to bring freedom to the people of her country. As the former Prime Minister of Pakistan, Benazir Bhutto is a living icon of the battle for democracy and stands with only a handful of female executive leaders who have shaped the global events of the last century.

First elected Prime Minister at the age of 35, Ms. Bhutto became the youngest Chief Executive Officer in the world and the first female Prime Minister in the Muslim world. After just 20 months in office, her government was unconstitutionally dismissed by a rival political party. Undeterred, she was reelected as Prime Minister in 1993.

During her terms of office, she was faced with an enormous challenge: how to effectively govern a poor, politically fractious and ethnically diverse nation. Prime Minister Bhutto was praised for moving swiftly to restore civil liberties and political freedom, suspended under military rule. She launched a nationwide program of health and education reform. Although no longer Prime Minister, Benazir Bhutto is Chairperson of the Pakistan People’s Party.

Women and Politics in Islam: The Trial of Benazir Bhutto