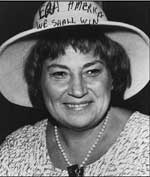 Bella was “born yelling” in 1920. A daughter of Russian immigrants, she grew up poor in the Bronx. By the age of thirteen, she was already giving her first speeches and defying convention at her family’s synagogue. At tuition-free Hunter College Bella was student body president, and on scholarship at Columbia she was one of only a minuscule number of women law students across the nation.

Abzug then worked as a lawyer for the next twenty-five years, specializing in labor and tenants’ rights, and civil rights and liberties cases. During the McCarthy era she was one of the few attorneys willing to fight against the House Un-American Activities Committee. While she ran her own practice, she was also raising two daughters together with her husband Martin.

In the 1960’s, Abzug helped start the nationwide Women Strike For Peace (WSP), in response to U.S. and Soviet nuclear testing, and soon became an important voice against the Vietnam War.

At the age of 50, Abzug ran for Congress in Manhattan and won on a strong feminist and peace platform. She quickly became a nationally known legislator, one of only 12 women in the House. Her record of accomplishments in Congress continually demonstrated her unshakable convictions as an anti-war activist and as a fighter for social and economic justice.

After three terms in Congress, Abzug gave up her seat in 1976 to run for an all-male Senate, but lost the Democratic primary by less than one percent. In an increasingly conservative political climate, Abzug also lost later bids for city mayor and for Congress.

In 1977, she presided over the historic first National Women’s Conference in Houston. She then headed President Carter’s National Advisory Committee on Women until she was abruptly fired for criticizing the administration’s economic policies in 1979.

In response, Abzug founded Women USA, a grassroots political action organization. At the same time, she was playing a major role at the UN International Women’s Conferences, practicing law, publishing and lecturing.

In 1990, Bella moved on to co-found the Women’s Environment and Development Organization (WEDO), an international activist and advocacy network. As WEDO president, Abzug became an influential leader at the United Nations and at UN world conferences, working to empower women around the globe.

—Courtesy of the Jewish Women’s Archive

Click here for supplemental reading about Bella Abzug on Amazon.