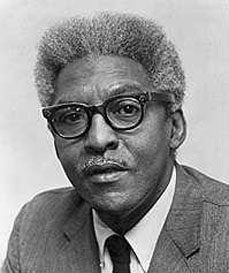 A master strategist and tireless activist, Bayard Rustin is best remembered as the organizer of the 1963 March on Washington, one of the larges nonviolent protests ever held in the United States. He brought Gandhi’s protest techniques to the American civil rights movement, and helped mold Martin Luther King, Jr. into an international symbol of peace and nonviolence.

Despite these achievements, Rustin was silenced, threatened, arrested, beaten, imprisoned and fired from important leadership positions, largely because he was an openly gay man in a fiercely homophobic era. Five years in the making and the winner of numerous awards, Brother Outsider presents a feature-length documentary portrait, focusing on Rustin’s activism for peace, racial equality, economic justice and human rights.

Rustin’s biography is particularly important for lesbian and gay Americans, highlighting the major contributions of a gay man to ending official segregation in America.

Lost Prophet: The Life and Times of Bayard Rustin by John D’Emilio.