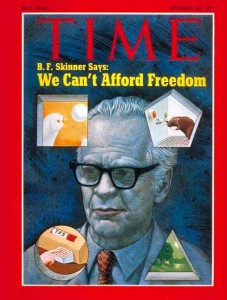 Burrhus Frederic Skinner (1904-1990) was an American psychologist and author. He conducted pioneering work on experimental psychology and advocated behaviorism, which seeks to understand behavior as a function of environmental histories of reinforcement. He also wrote a number of controversial works in which he proposed the widespread use of psychological behavior modification techniques, primarily operant conditioning, in order to improve society and increase human happiness, as a form of social engineering.

Skinner was born in rural Susquehanna, Pennsylvania. He attended Hamilton College in New York with the intention of becoming a writer and received a B.A. in English literature in 1926. After graduation, he spent a year in Greenwich Village attempting to become a writer of fiction, but he soon became disillusioned with his literary skills and concluded that he had little world experience and no strong personal perspective from which to write. During this time, which Skinner later called “the dark year,” he chanced upon a copy of Bertrand Russell’s recently published book, An Outline of Philosophy, in which Russell discusses the behaviorist philosophy of psychologist John B. Watson. At the time, Skinner had begun to take more interest in the actions and behaviors of those around him, and some of his short stories had taken a “psychological” slant. He decided to abandon literature and seek admission as a graduate student in psychology at Harvard University (which at the time was not regarded as a leading institution in that field).

Skinner received a Ph.D. from Harvard in 1931 and remained at that institution as a researcher until 1936. He then taught at the University of Minnesota at Minneapolis and later at Indiana University before returning to Harvard as a tenured professor in 1948. He remained there for the rest of his career.

Skinner was granted numerous awards in his lifetime. In 1968, he received the National Medal of Science from President Lyndon B. Johnson. Three years later, he was awarded the Gold Medal of the American Psychological Foundation, and in 1972, he was given the Humanist of the Year Award of the American Humanist Association. Just eight days before his death, he received the first Citation for Outstanding Lifetime Contribution to Psychology by the American Psychological Association.

Walden Two is a novel published in 1948 by B. F. Skinner, who intended it to describe a utopia. Others have claimed that the society described in the novel is a dystopia, noting its similarity to cults.

Skinner wrote: “It is now widely recognized that great changes must be made in the American way of life… The choice is clear: either we do nothing and allow a miserable and probably catastrophic future to overtake us, or we use our knowledge about human behavior to create a social environment in which we shall live productive and creative lives and do so without jeopardizing the chances that those who follow us will be able to do the same. Something like a Walden Two would not be a bad start.”

Click here for supplemental reading about B. F. Skinner on Amazon.