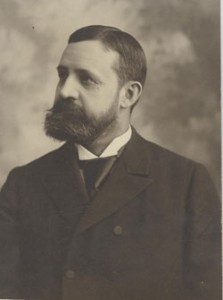 Austin Samuel Garver was born in Scotland, Pennsylvania on December 12, 1849, and died in Worcester, Massachusetts, on June 20, 1918. He graduated from the Andover Theological School in 1871, and in the following year was ordained to the Congregational ministry. For eight years he remained in that communion and then, desiring a larger freedom, he transferred his allegiance to the Unitarian fellowship. For five years he served the church in Hopedale, Massachusetts, whence he was called to the Second Parish (First Unitarian Church) in Worcester. For twenty-five years he labored there with unfailing fidelity, and upon retiring from the active ministry, he was made pastor emeritus. To the day of his death he continued to serve both the church and the city that he loved. In 1881 he married Sarah C. Brackett, of Braintree, who contributed much to the charm and hospitality of his home.

A perusal of the bulky scrapbooks containing extracts from his sermons, programs of Conferences and other gatherings, and letters which he had received during the twenty–five years of his ministry in Worcester, reveals something of the esteem in which he was held not only by the men, women and children of his parish, but by his brethren in the ministry and multitudes of his fellow citizens. That his ability was widely recognized is established by the fact that he was sought after for such important positions as Secretary of the American Unitarian Association, as colleague to Edward Everett Hale, and as President of the Meadville Theological School. But his heart was in Worcester and nothing could induce him to leave the Second Parish.

No one who ever heard Mr. Garver preach or read the all too few of his printed sermons can fail to be impressed by their lucidity and sincerity. While the manner of his preaching was quiet, it was a quietness charged with passion. Without a particle of sensationalism he was a fearless and forceful preacher. In uprooting things that are bad he was a radical; in preserving things that are good he was a conservative.

Next to Mr. Garver’s passion for the truth was his love of the beautiful. To him art was the handmaiden of religion and the holiness of beauty was as sacred as the beauty of holiness. He was one of the first, if not the very first, to introduce the use of pictures in the Church School. He traveled widely and made the acquaintance of the art treasures of the world. Through his love of beauty he became interested in the Art Museum of the city of Worcester, and in due time was chosen its President. He served also as President of the Worcester Art Society and as a member of the Public School Art League.

Next to his influence in the religious and artistic interests of the community was his concern for education. Early in his ministry in Worcester he became conspicuous because of some trenchant criticisms of the administration of the Public Schools. He was soon called upon to lend a hand in reforming the school system. He was elected to the School Committee and for thirteen years in that capacity rendered invaluable service to the children of the city. His wisdom and experience were also availed of by his election to be a trustee of Clark University, of the Worcester Polytechnic Institute and of Leicester Academy. His interest in historical research is attested by his membership in the American Antiquarian Society.

Nor was Mr. Garver’s interest confined to the church he served for a quarter of a century, to the schools or the Art Museum. One cannot peruse the multitude of letters he received without realizing the large-heartedness and wide-spreading sympathies of the man. In the words of one of his associates: “He was a lovable man and endeared himself to everyone with whom he came in contact…. He loved children and his fellowmen; he was a friend of everyone and everyone was his friend.” Especially his brethren in the ministry had reason to feel his friendly spirit. Scarcely a year passed that the Worcester Association of Ministers was not invited to his hospitable home and delightfully entertained. Moreover, he was ever ready to listen to a comrade’s troubles and give him comfort and courage. Many times throughout his ministry was the worth of Mr. Garver’s service recognized by his friends and parishioners. But the climax of their esteem was expressed, after he had served the Second Parish in Worcester for a period of twenty years, in a letter which was handed to him in behalf of the Church by his parishioner and friend Stephen Salisbury, and which reads in part as follows:

Your entire parish, one and all, send you most sincere and affectionate greetings upon the twentieth anniversary of your connection with our church. From the moment that you assumed the responsibilities of your difficult office, we became aware of the beautiful qualities of mind and heart that you possess, the sincerity, truthfulness, and disinterestedness of your character, the refinement of your cultivated intellect, and your persistent devotion to what you deemed right and best for our true interest and for the good of the community.

We regard with great satisfaction the love of art and poetry that has manifested itself so noticeably in your connection with our civic and social life. Your efforts to create and encourage a correct taste for the beautiful and true in literature and art, and your careful preparation as a leader in art studies, has made you an authority in these matters, and has helped very much to promote an interest in the whole domain of art in our city.

The high quality of your discourses and their application to the individual needs of your parishioners, and the beautiful diction and finish of all your public utterances, have created in us great admiration for your acknowledged influence among men of every variety of belief, as well as in the councils of the liberal faith.

For the last eight years of his life, though relieved of parish responsibilities, he continued, like his Master, going about doing good. On the day that he died he had conducted the funeral service for a venerable friend in a neighboring town and was on his way to the graduating exercises of Clark University. Wrote President G. Stanley Hall, “I believe I was the last person to speak to him on that fatal Commencement Day. I had scarcely turned away from him when he fell.”