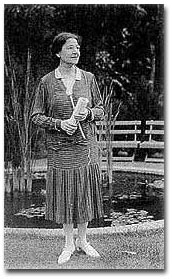 An expectant audience was not disappointed when Frederick May Eliot, the president of the American Unitarian Association, introduced the first woman moderator to them. Speaking to the assembled delegates at the 1940 May Meeting, he called Aurelia Henry Reinhardt “as distinguished a Unitarian as there is in the land.” Aurelia Reinhardt proved herself to be a distinguished leader of the Unitarian movement, not only through her two-year term as moderator during the bleak years of war in Europe but throughout her life. She was a scholar, an educator, an advocate for women, and a committed bibliophile. 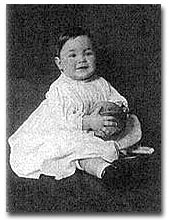 Born in California, one of six children, Aurelia Isabel Henry began to excel in her studies while attending Boy’s High in San Francisco. She pursued a degree in English literature at the University of California, Berkeley, graduating in 1898. After several years of teaching in Idaho, she returned to her studies of literature and completed a Ph.D. at Yale University in 1905. During this period, Aurelia Henry not only wrote a dissertation (on Ben Johnson’s work Epicoene) but also translated Dante’s essay “De Monarchia” from Italian into English. Both studies were published, attesting to her strong scholarship and fine writing style. Aurelia Henry’s literary pursuits in higher education were an indication of the determination that would mark all of her achievements in later life. She was, significantly, among a small group of women who undertook graduate education in the early 1900s and an even smaller number of women who would demonstrate leadership in educational administration, religious life, and civic engagement. 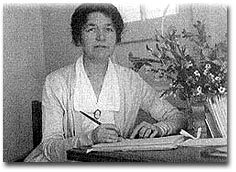 Aurelia Henry married Dr. George Reinhardt in 1906. Just six years later, she found herself a widow and the single parent of two small sons. She was able to secure a teaching position through the University of California’s extension program. Then, in 1916, her life and that of a small, struggling women’s college irreversibly changed when she assumed the presidency of Mills College in Oakland. She remained as its head for twenty-seven years, retiring in 1943 after a successful program of student and faculty expansion. Among the universities granting her honorary degrees were the University of California, the University of Southern California, and Oberlin College.

A painting of Reinhardt by R.L. Partington, which hangs in the Ethel Moore Dining Room at Mills College. Courtesy of the Special Collections Department, F.W. Olin Library, Mills College.

In addition to her work as an educator, Aurelia Reinhardt worked tirelessly for peace. As early as 1919, she publicly declared herself an advocate for world peace. Although a Republican Party activist, she broke ranks to stand behind President Woodrow Wilson’s plan for the League of Nations. A member of more than a dozen peace organizations for the next three decades, she served as a delegate to the founding meetings of the United Nations in San Francisco in 1945. She spoke to dozens of church and community groups about the imperative of peace and the importance of international collaboration, including the value of cultural and educational exchange exemplified by UNESCO.

While engaged in these peace activities and fulfilling her responsibilities as president of Mills College, Aurelia Reinhardt also took a leadership role in civic groups, including serving as president of the American Association of University Women, as chairman of the department of education for the General Federation of Women’s Clubs, and as a member of a number of local governmental commissions. Because of her belief in civil society and its responsibilities, she invariably took the side of those individuals who had no resources, who lacked adequate support, or who had in some other way been marginalized by society. She spoke on behalf of youth during the Depression and for women’s equal access to education and professional recognition throughout her life. 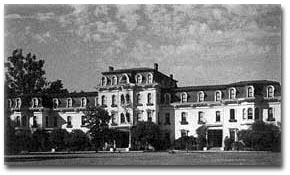 An avid nature lover, Aurelia Reinhardt was also active in environmental preservation groups, including those concerned about the forests of California. Her persistence in warning against the threat to nature from rampant development was relentless and took many forms. This view was based on a theology she believed to be infused by Christian Unitarian understanding.

The importance of Unitarian religious identity for Aurelia Reinhardt cannot be overstated. Married in the First Unitarian Church of Berkeley, she was later to join the church to which her family had belonged, the Oakland Unitarian Church, where she even assumed interim ministerial responsibility during a short period in the 1940s. Known for her eloquence and delight in making new friends, she was asked to speak in many Unitarian churches and rarely refused the opportunity. 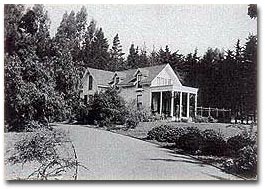 Mills President’s House in 1924 when Reinhardt was in occupancy. Courtesy of the Special Collections Department, F.W. Olin Library, Mills College.

Aurelia Reinhardt attracted national recognition when she was invited to deliver the Ware lecture at the May Meeting of the American Unitarian Association in 1932, one year after Nobel laureate Jane Addams. Two years later she joined a select group of religious leaders in the movement to prepare the report of the Commission on Appraisal, Unitarians Face a New Age. She wrote the chapter on worship, which remains a singular contribution to Unitarian understanding of liturgy and worship. In the same period, she served on the Board of Trustees of the Starr King School for Ministry in Berkeley. She stated this goal for professional religious leadership: “Let us not forget that the future includes more women in the ministry than we have ever known before.” She was enthusiastic about this prospect.

— Excerpted from Standing Before Us, edited by Dorothy May Emerson