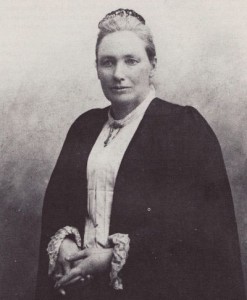 One of the earliest women to be ordained a Universalist minister, Chapin was also the first woman to receive an honorary D.D. She was born in Lakeville, New York on July 16, 1836 to Almon and Jane (Pease) Chapin. The family moved to Michigan when she was six. She became a teacher when she was fourteen and taught school in Lyons and Lansing, Michigan, but was unable to enroll at the University of Michigan for college, as it did not accept women. Eventually she went to Olivet College, where she converted to Universalism, and decided to become a minister. She was an itinerant preacher in the Portland, Michigan area for about four years.

Chapin received Universalist fellowship in May 1862, and was ordained in Lansing, Michigan on Dec. 3, 1863. She remained for another three years in Portland in a permanent settlement. After that she served many more congregations, a few of which were yoked parishes. The longer settlements included Iowa City, Iowa 1870-1874; Oak Park, Illinois 1886-1892; and Mt. Vernon, New York 1897-1901. She was active in mission work for a number of years with short ministries in Omaha and San Francisco. She also helped organize the first Universalist State Convention in Oregon. When she was in Iowa City she was one of three delegates from her state to the Centennial celebration in Gloucester, Massachusetts. She addressed the Woman’s Centenary Association, and promised further assistance from the West.

Chapin became the first woman to serve on the council of the General Convention, and she advocated that half of the trustees should be women. Prior to being called to a Hillside, Michigan pastorate in 1884, she finished an M.A. at the University of Michigan, which had denied her acceptance years previously. In the period between her Oak Park and Mt. Vernon settlements, she taught at the University of Chicago as a lecturer on English literature. She was also active in national suffrage work, and became one of the founders of the American Woman Suffrage Association. Chapin served on the organizing committee of the World Parliament of Religions in Chicago in 1893, and was chairwoman of the Women’s General Committee. She gave comments at the opening and closing events of the World Parliament, read a paper Antoinette Brown Blackwell had prepared on women in ministry, and also moderated another session where two of the speakers were women. She was also on the committee to organize the Universalist congress there. At the World’s Fair Chapin received her honorary D.D. from Lombard University. She had lectured there for some years in a non-resident capacity. In her later years she led tours of Europe, and was planning for one when she died of pneumonia in New York City on June 30, 1905.

The Universalist Leader noted her passing with high praise:

“Thus passes one of the earliest and most conspicuous of our women preachers; one who by her ability and consecration and her broad-minded sympathies with every good cause, commanded universal respect and won enduring friendships.”

More on Augusta Jane Chapin’s Leadership in the World Parliament of Religions, 1893

The World Parliament of Religions, held in conjuncture with the 1983 World’s Fair in Chicago, was the first formal gathering of representatives of Eastern and Western spiritual traditions. Today, it is recognized as the birth of formal interreligious dialogue worldwide. The 1863 Parliament ran from September 11 to September 27 and was the largest and most spectacular event among many other parliaments in the World’s Fair. The World’s Fair, or Columbian Exposition, was a large trade fair held to celebrate the four hundredth anniversary of the discovery of America by Christopher Columbus.

The organizing process of the Parliament began after Charles Carroll Bonney, a layman in the Swedenborgian church and the president of the World’s Congress Auxiliary, appointed John Henry Barrows to administer the General Committee on the Congress of Religion, which eventually was called the World’s Parliament of Religions. Under Barrows’ leadership, the Parliament was expected to be “the most important, commanding, and influential, as surely it will be the most phenomenal fact of the Columbian Exposition.”

In June 1891, more than three thousand copies of the Preliminary Address was sent out to the world, informing the plan of the 1893 Parliament and inviting religious leaders from all over the world to attend to it. Among those invited was Augusta Jane Chapin, an ordained Universalist minister. Chapin served as chairwoman of the Women’s Committee and was the only woman to preside over a session of the Parliament. She addressed both the opening and closing sessions.

The 1893 Parliament must be recognized as a great achievement within the modern civilization in general and the Western American culture in particular. As Marcus Braybrooke said, “it remains a remarkable pioneer event, and no subsequent inter-faith gathering has come near to it in size or complexity.” The glory of the Parliament was most obvious in the opening ceremony, on September 11, 1893. More than four thousand people had gathered in the Hall of Columbus, when at ten o’clock a dozen of representatives from different faiths marched into the hall hand in hand. At the same time, the Columbian Liberty bell in the Court of Honor tolled ten times, honoring the ten great world religions—Confucianism, Taoism, Shintoism, Hinduism, Buddhism, Jainism, Zoroastrianism, Judaism, Christianity, and Islam. The inaugural ceremony began with “an act of common worship to Almighty God,” in which Isaac Watts’ paraphrase of the hundredth Psalm was sung:

Praise God, from whom all blessing flow;
Praise him, all creatures here below;
Praise him above, ye heavenly host;
Praise Father, Son and Holy Ghost.

Afterwards, Cardinal Gibbons led the crowd in the Lord’s Prayer, which interestingly became the “universal prayer”—to use Barrows’ words—that marked the beginning of each day during the seventeen days of the Parliament.

Statistically speaking, the Parliament was dominated by English-speaking Christian representatives, who delivered 152 of 194 papers. The opportunity for the leaders from other religious traditions was limited but significant; 12 speakers represented Buddhism, 11 Judaism, 8 Hinduism, 2 Islam, 2 Parsis religion, 2 Shintoism, 2 Confucianism, 1 Taoism, and 1 Jainism.

Swami Vivekananda, a Hindu monk, gave three eloquent speeches that introduced the American public to Hinduism and undoubtedly drew the most attention. When Vivekananda addressed the audience as “sisters and brothers of America,” the 7,000-person audience greeted Vivekananda with a three minute standing ovation. Vivekananda celebrated toleration and condemned fanaticism and its ills: “I am proud to belong to a religion which has taught the world both tolerance and universal acceptance. We believe not only in universal toleration, but we accept all religions as true.”