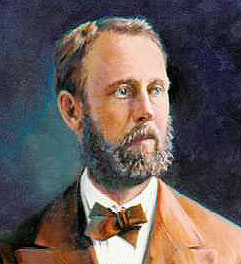 Painted by Beverly Stautz. Courtesy of the US Naval Observatory.

Born in Goshen, Connecticut and educated largely at home by his father, Asaph became an apprentice carpenter at the age of thirteen after both of his parents died. After studying one year at the University of Michigan at Ann Arbor, his passion for geometry and algebra led him to become an assistant at the Harvard College Observatory. He then had a wife, $25 in cash, and a salary of $3 a week.

When he left in 1863 for the U.S. Naval Observatory, he was in charge of its great refractor, located at Foggy Bottom on the banks of the Potomac River in Washington, D.C. In 1878 he saw a “a faint star near Mars” which turned out to be outer and inner satellites of Mars. Hall named them Phobos (Fear) and Deimos (Flight) after the attendants of Mars mentioned in Homer’s Iliad, and he measured their mass in comparison with Earth (0.1076 percent). Word came from the Paris Observatory that this was “one of the most important discoveries of modern astronomy.” In 1879 Hall was presented the Gold Medal of the Royal Astronomical Society of Great Britain.