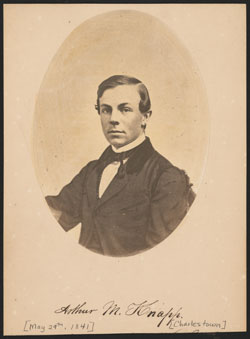 It was the happy lot of Arthur May Knapp to be the pioneer leader of a unique missionary adventure. He was born in Charlestown, Massachusetts, on May 29, 1841, and prepared for college at the famous Allen School in West Newton. He entered Harvard as a sophomore and graduated in the Class of 1860. Then, perhaps for health reasons or perhaps just for adventure, he went to sea and made a voyage round Cape Horn in the ship Crusader, a name prophetic of his later career. He got back to Boston in time to enlist as a private in the Forty-fourth Massachusetts Regiment. When his military service was over, he entered the Harvard Divinity School and graduated in 1867. His good looks, his family background, his genial personality, commended him at once to the favor of several churches. He accepted the call of the First Congregational Church in Providence, Rhode Island, and was ordained there on January 8, 1868, and had a brief but developing pastorate of three years. Then he took charge of the Independent Congregational Church in Bangor, Maine (1871–1879), where he was abundantly happy and popular. He was eminently companionable, progressive in thought, gay of heart, buoyant in spirit. In 1879 he was called to the First Parish Church in Watertown, Massachusetts, and served there for seven fruitful and contented years. Then came the exceptional opportunity that gave unique distinction to the career of one whose life had thus far been that of a parish minister of excellent repute.

In the last half of the nineteenth century, the empire of Japan had emerged from its long isolation and was rapidly entering into relations with the western nations. Commercial and political contacts led on to cultural connections. The Japanese were in the mood to adopt European and American methods in business and education and military preparedness. The door was opened too for Christian missionary efforts and most of the occidental churches, both Catholic and Protestant, sent their representatives to Japan and founded schools and gathered churches.

Certain of the intellectual leaders of the country, including a number of young men who had studied in Europe or America, were, however, eager to discover some more appropriate and adequate spiritual impulse and motive. They found the dogmatic interpretations of Christianity no more satisfying than their own Confucian or Shintoist or Buddhist inheritances. They had come to believe that back of the power and prosperity of the western nations there must be some special inspiration or driving force and felt that that impulse must be somehow derived from the Christian religion. On the other hand, the irrational assertions and the supernatural claims of orthodox Christianity left them cold. The leader of this group of intellectual and spiritual adventurers was Yukichi Fukuzawa, one of the most influential and public-spirited citizens of Japan and the founder of the Keio University. Around him gathered a considerable number of scholars and progressive publicists, and in 1886 there joined them a diplomat just returned from England, Mr. Yano Fumio. In a series of articles in a leading Japanese journal, the Hochi Shembun, he declared that he had found in England a practical and spiritual interpretation of Christianity free of superstition and unreasonable dogmas and well adapted to the needs of the Japanese people. It was called Unitarianism. Whereupon the group, to which had been added a recent graduate of Harvard, the Baron Kaneko, addressed a communication to the American Unitarian Association suggesting that the Association send to Japan a representative who would be commissioned to explain and elucidate the Unitarian habit of mind and principles of conduct.

This invitation was cordially received by the Directors of the Association, and in 1888 Mr. Knapp was commissioned to go to Japan “to meet with, to encourage, and to cooperate with any individuals or groups of persons in Japan who might wish to know the more advanced thought of Christendom about the spiritual problems and interests of man.” In fulfilling this commission Mr. Knapp enjoyed a year full of exhilarating experiences, and he brought back such glowing reports that the Directors of the Association acted promptly and vigorously. A band of six preachers and teachers was recruited and in 1889 Mr. Knapp returned to Tokyo accompanied by the Rev. Clay MacCauley as his colleague, by Mr. Saichiro Kanda, who had been studying at the Meadville Theological School and who was to serve as secretary of the mission, and by three young professors who were to divide their time between the mission and teaching in the Keio University. The mission was further reinforced by the Rev. H. W. Hawkes, who represented the British Unitarians. “Receive us,” wrote Mr. Knapp to his Japanese friends, “not as theological propagandists, but as messengers of the gospel of human brotherhood in the religious life of mankind.” The mission was established, so runs the record, “to express the sympathy of the Unitarians of America for progressive religious movements in Japan,” and Mr. Knapp and his companions were commissioned “not to convert, but to confer.” They said to their Japanese hosts, “Here is what we have discovered about the mysteries of life and death. Now tell us what you have discovered from your different point of view and out of your study and experience.” They sought to work not so much for their Japanese associates as with them in the discernment of truth and the promotion of brotherhood and good will.

The mission was received with great cordiality. Large audiences listened to lectures and sermons in the chief cities. A magazine, Rikugo Zasshi (Cosmos), was started and soon acclaimed as the best religious paper in Japan. A noteworthy series of tracts was published and a school for the training of leaders was opened with seven teachers and a diligent band of pupils. Close relations were established with the faculties and students of the Doshisha, Waseda, Keio, and Imperial Universities. Finally, a Japanese Unitarian Association was organized and in 1894 Unity Hall in the Mita District of Tokyo was built to house all its activities.

After getting things well started Mr. Knapp handed over the direction of the mission to his colleague, Dr. MacCauley, and to a new associate, Rev. William I. Lawrence, and returned to the United States. For seven years he was the minister of the Unitarian Church in Fall River, Massachusetts, but he kept in correspondence with triends in Japan and in 1900 went back to Tokyo not to resume charge of the mission but to be the proprietor and editor of a newspaper of growing influence, the Japan Advertiser. He also wrote a book, Feudal and Modern Japan, an authoritative account of the social and political development of the Empire.

In 1910 Mr. Knapp finally returned to America and made his home at West Newton, Massachusetts, amid the scenes and people familiar in his youth. But his closing years were sad. Both his wife and his son, their only child, died, and he was himself afflicted with crippling disease. His release from prolonged illness came on January 29, 1921.

The Unitarian mission in Japan was unique in more than one respect. It was exceptional in its origin because it was undertaken at the invitation and upon the initiative of Japanese citizens. It was unique in its design which was not to put over a foreign form of faith but to meet Japanese scholars and religious leaders on common grounds. It had a profound influence not only on the religious life of Japan but also in modifying the methods and animating the spirit of the older Christian missions. Finally, it was unique in its fulfillments. The administrators of the Japanese Unitarian Association rapidly proved themselves to be competent and faithful, and in 1900 the direction of the mission, the care of the property, and the advancement of the cause was entrusted entirely to them. Dr. MacCauley, to be sure, kept in touch by occasional visits, and in 1909 he again took up residence at Unity Hall and for eleven years lived there, in no sense as director but as “guide, philosopher, and friend.” No other mission, though much longer established, had found it possible to relinquish foreign control. After only twelve years the Japanese Unitarians proved themselves qualified to carry on the enterprise with efficiency and largely, though not wholly, on their own resources.