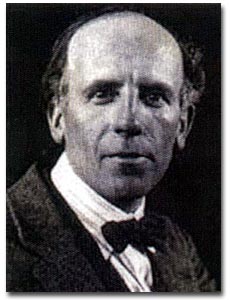 Born into a working-class Unitarian family amidst the fog and factory smoke of Sheffield, England, Arthur Lismer was eventually to find fame as a young, impressionist painter of the Canadian countryside. Considered by many a place of industrial ugliness, Sheffield may have inspired in Lismer the desire to celebrate what bastions of untouched nature remained in the world. As a boy, he took lonely hikes through the English countryside, on shorelines of sharp cliffs and on the borders of bellowing seas and narrow fjords. On these trips Arthur took his sketching books and his paints, recording day by day the limitless incantations of the moody and weather-filled seascapes.

In spring, he would often walk all night along the Manchester Road, providing his mother with limitless worry, and himself with moonlit inspiration for his sketchbooks, which he filled as fast as he could buy. In 1917, Lismer’s mother would write to him from across the Atlantic and, in a tender moment, recall Arthur as a boy. He was full of “mimic and mischief,” she wrote, though she also recalled that he was a sensitive boy, aware of his surroundings and of the heartbreaking beauty of nature. At the age of nine, she reminded him, he had burst into tears at the mere sight of a field of spring flowers. Later in life, Arthur’s weeklong hikes in search of beauty and his subsequent painting binges would become his inspiration and trademark as an artist. The artist’s duty, Lismer would later write, is to invest in “his passion for beauty, and out of the poignancy and pain of existence, [hold] steadfastly to the integrity of the human aspiration for beauty.”

As a boy, Lismer drew casual cartoons, animals, woodlands, Boer War heroes and caricatures, drawing discreetly even during weekly Unitarian services (much to his mother’s dismay). Later in life, interestingly enough, Lismer came to cherish the memory of his own childhood art and herald the importance of art education for youngsters.

As a boy, it was clear that he was not destined for factory or engineering work like his brothers. His father knew it, and in turn encouraged his son to pursue his own artistic flourishing. By the age of thirteen, Arthur had applied to the Sheffield School of Art. Though there was some doubt on his mother’s part as to whether the traditionally upper-class art world would be an appropriate place for her middle-class boy, she agreed to the program, and on some level was reassured that her son would receive a professional, seven year training geared towards the production of commercial art. The school was interested more in skill than in insight or inspiration, and though Lismer would often consider the training “dull,” he would later confess that the thorough and meticulous instruction was useful. 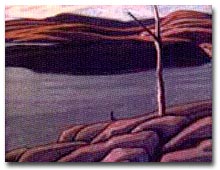 By the age of twenty-six, Lismer had gotten engaged to Esther Mawson, a companion from his late night walks, and had gone into business for himself as a “specialist in pictorial publicity,” specializing in press art. Despite his rigorous training, and despite his talent, keeping afloat and profitable was a struggle. At the same time, many British artists were immigrating to Canada where, it was said, prospects for an active career in the commercial arts were increasing. As friend after friend emigrated and wrote back of successes, Lismer found he could bear Sheffield no longer, and in 1911 chopped up his former office desk, made a traveling trunk of it and boarded ship for Canada. He had left his fiance and family in England, though in a year’s time, after having established himself in Toronto, he would return to England, marry Esther in the local Unitarian church, and return to Canada with his new bride.

In Toronto, Lismer had found work with Grip, perhaps Canada’s most prominent commercial art firm. There, he befriended the firm’s crew of talented artists, who, with Lismer, began traveling to the Canadian countryside for painting trips. The group of friends would come to form what is today known as the “Group of Seven”. Collectively, the Group deeply altered the Canadian art scene. In 1914, after a three week trip with co-worker Tom Thomson, Lismer wrote the following: “The first night spent in the North and the thrilling days after were turning points in my life. . . the bush, the trails, lakes, waterfalls . . . moving camp from one wonderful lake to another portage and tent-pitching, fishing and sketching, and above all, the companionship of a great individual, a wonder with canoe, axe and fish line.” 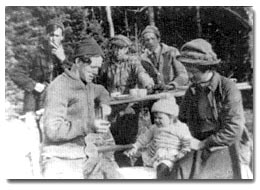 Until now, the natural beauty of Canada had not been painted successfully in its own style, represented for its own character and spirit, or celebrated by Canadian artists for its unique beauty. The concept of doing so, in fact, had seemed a foreign one. “It is necessary,” Lismer wrote, “that as Canadians we should believe we are capable of producing great art as we believe we are capable of doing great deeds.”

Formed together to paint the Canadian landscape as its own entity of unique power and beauty, the Group of Seven offered an artistic tribute to the wild grandeur of Algoma, the hills of Quebec, the shores of Lake Superior, Northern Ontario, the Canadian Rockies and, as was most often the case with Arthur Lismer, the Georgian Bay. Lismer would return to the Bay time and again, throughout the remainder of his life, habitually varying his approach but always focusing on the changing forces and opposing movements that compose the fluid and elusive states of nature. As fellow Group of Seven member Lawren Harris wrote:

In matters of art and culture Canadians were at that time a subservient people. The idea was generally held that anything we ourselves created was not worth serious consideration. The European and old country outlook and ideas of art dominated and dictated our artistic efforts. Their suitability to our creative needs as a young and growing country were never questioned. . . . Canada was a country that demanded to be painted with complete devotion before it yielded its austere and remote secrets. . . . [We] did not recognize our own country as a paintable land. Since that time the paintings of the Group have been accepted by most Canadians as the beginning of a creative tradition in art engendered by the country itself.

In what would prove a coming of age for all Canada, Lismer and the Group of Seven memorialized the Canadian landscape in one painting after another, describing the land with brilliant impressionist colors, coarse brush strokes, and a romantic sense of form and natural rhythm. Meeting at first with public opposition (because of their avant-garde style) the Group of Seven would, with time—as the critics grew to perceive the beauty and nationalistic significance of their individuality—meet with great success. 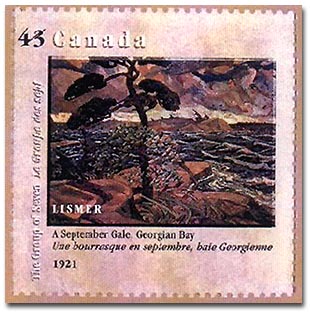 As a painter, as a pioneer, and as a “founding father” of consciously Canadian art, it was clear within a few short years of his debut that Arthur Lismer would always be remembered. Patriotic and inspiring as they were, his paintings would come to adorn the walls of Canadian governmental offices, galleries, museums, and the homes of Canada’s cultural elite. Though they are no longer thought of by the general public as avant-garde or revolutionary in nature, they are cherished as masterworks and remain precious commodities on the art market.

In 1995, for the Group’s 75th anniversary, a show of 189 of the Group’s paintings toured Canada, and the National Gallery of Canada asked a musical group, the Rheostatics, to write a forty minute piece of music honoring the Group’s work. It is a mainly instrumental work, created to evoke melting landscapes and thrilling skies. “Every Canadian knows the Group of Seven,” wrote The Financial Times reporter Nick Woodsworth in November of 2000. “No public building is bereft of patriotic pictures by Arthur Lismer.” Recently, as Lismer would have been pleased to know, third and fourth graders at the First Unitarian Church of San Jose created art inspired by Lismer’s own paintings.

Arthur Lismer’s contribution to Canadian art, however, includes more than his own colorful canvasses. Lismer was also endowed with the passion to teach and to bring art to youngsters at all costs. With prestigious teaching posts at the Montreal Museum of Art and at McGill University, it was just five years after immigrating to Canada, in 1916, that Lismer was offered the position of principal of the Nova Scotia School of Art. Then, in 1919, he took a position as Vice-Principal of the Ontario College of Art, and in 1929, the position of Educational Supervisor at the Art Gallery of Toronto. It was there that Lismer flourished as a teacher and as an educational leader. 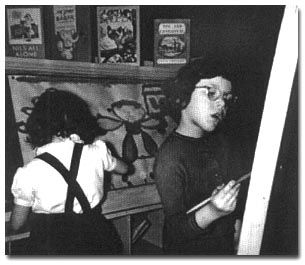 A Saturday morning children’s class at the Montreal Museum of Art.

Committed to the idea that every child could be invigorated by art, Lismer worked tirelessly to provide accessible art instruction to youngsters. Convinced also that the creative energy of the child can never be wholly lost, he encouraged adults to start classes as well, and succeeded at bringing all ages together in the classroom. Lismer filled the Art Gallery’s dignified and marble tiled rooms with crowds of energetic children and adults, each armed with pencil and paper, each anxious to record on paper some intrinsic creative energy. Lismer loved it, preaching constantly that the artistic impulse inherent in all people should be encouraged and allowed to find “natural and simple forms of expression.” In a letter to a friend, Lismer wrote, “I teach twenty-five hours a week, travel a fair amount to other spots to do just that, run a school and several art centers around Montreal, and get horribly fatigued and exhilarated.” In a lengthy booklet about the school published by the Art Gallery of Toronto, Lismer eloquently and persuasively describes the school’s purpose and value:

It has formed a fertile field for the growth and sustenance of people. . . . It is a living manifestation of the expression that life is not all depression and material possessions. . . .

It is much more than art as lessons, skills, accomplishments and professional careers in the making, it is an effort to release valuable human capacities. . . .

The aim of the Art Centre is not to train artists, or teach art, or instruct in drawing, but to lead out from the child, encouraging every spark of feeling and originality and to aid in the extension and co-ordination of hand, eye and mind toward the development of a more emotionally active and alive little personality.

Each Saturday morning Lismer seemed to accomplish the impossible: he drew hundreds of people into the Art Gallery, filling its rooms and crowding its halls so that only standing room remained. It seems that each day his classes provided something of a famous event. Relatively careless of his clothes and appearance, Lismer was known to move happily through the Gallery, disheveled and energized, observing and encouraging his children, guiding their hands as they drew, his own coat pockets bulging with pencils, crayons, pipe, paper and notebooks. 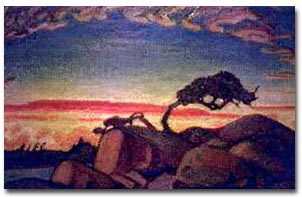 With time, Lismer was invited to lecture in England, France, the United States, Australia, South Africa, Hawaii, the Fiji Islands, and New Zealand. Many came to love him and praise him. Perhaps the definitive statement is provided by Sidney Key, who in 1950 wrote the introduction to a small but beautiful booklet of Lismer’s paintings, entitled Arthur Lismer: Paintings: 1913-1949: “More than any other member of the Group of Seven, Arthur Lismer has kept alive the spirit of freedom and even controversy.” He has expounded the doctrine of the artist’s right to self- expression from one end of Canada to the other, in the United States and half way round the world with the unflagging zeal and resource of a crusader. . . . He has engendered, wherever he appears, respect or at least tolerance for the experimental and personal.”