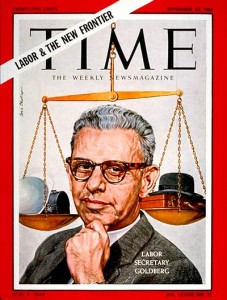 Goldberg was born and raised on the West Side of Chicago, the youngest of eight children of Jewish immigrants. The family originally came from Poland. Goldberg’s interest in the law was sparked by the famous 1923 murder trial of Leopold and Loeb, wealthy young Chicagoans who were spared the death penalty with the help of their high-powered defense attorney, Clarence Darrow. Goldberg would later point to this case as inspiration for his opposition to the death penalty on the bench, as he saw how inequality of social status could lead to unfair application of the death penalty.

Goldberg earned a distinguished reputation as a student at the Northwestern University School of Law, where he edited the law review, graduating in 1930. Goldberg became a prominent labor lawyer, representing striking Chicago newspaper workers on behalf of the CIO in 1938. He served in the Office of Strategic Services as a contact with the European underground labor movement during World War II. Appointed general counsel to the CIO in 1948, Goldberg served as a negotiator and chief legal advisor in the merger of the AFL and CIO in 1955. President Kennedy appointed Goldberg to two positions. The first was Secretary of Labor, where he served as a mentor to the young Daniel Patrick Moynihan. The second was an associate justice of the Supreme Court of the United States, replacing Felix Frankfurter.

Perhaps Goldberg’s most influential move on the Court involved the death penalty. Goldberg argued in a 1963 internal Supreme Court memorandum that imposition of the death penalty was condemned by the international community and should be regarded as “cruel and unusual punishment,” in contravention of the Eighth Amendment. During his tenure on the Supreme Court, one of his law clerks was future Associate Justice Stephen Breyer. Another was prominent criminal law professor Alan Dershowitz.

Click here for supplemental reading about Arthur Goldberg on Amazon.