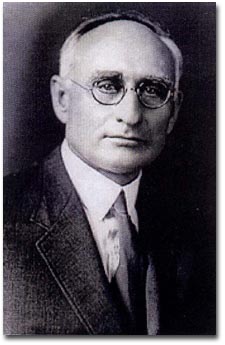 I first met Arthur Morgan when I was sixteen years old. He was speaking in Boston about Antioch College and his dream of a new and better kind of education. We being Unitarians, my mother took me in to hear him. I remember a tall, spare figure, raw-boned like Lincoln, with deep set, kindly eyes and intense seriousness. His voice was pleasant, his logic lucid and overwhelmingly persuasive, his points illuminated by homely illustrations from his own experience, which made his theories come alive. As we left the meeting, I felt as if I had seen a vision and was suffused with its light. I said to my mother, “I must go to Antioch!”

I applied the next day, and in due course there came an application form and a test to be taken. It was quite an unorthodox test. The College, it seemed, wanted to know not just what my I.Q. might be and how much I already knew, but it sought to plumb my attitudes, motivations, sense of purpose and social feeling. I must have passed, for the Fall of 1931 found me in the entering Freshman class at Yellow Springs.

I found Arthur Morgan very much at the heart of things at Antioch. His home was the center of innovative ideas and the source of a running dialogue of constructive self-criticism. Though busy with fund raising and a thousand administrative responsibilities, Morgan had time for any student who had come alive with one of his ideas and wanted to worry it a bit. He spoke often at College assembly, and his brief, terse published communications called “Antioch Notes” were thought provoking and life provoking.

When he was on campus he frequently went walking early on Sunday mornings in beautiful, thousand acre Glen Helen at the campus’ edge. He let it be known that students would be welcome to walk with him. He carried the makings of breakfast in a knapsack on his back, and somewhere along the way would stop, build a fire and cook breakfast to undergird the discussion. It meant getting up early, around five thirty a.m., but I walked often with him. Sometimes there were just the two of us.

On these walks he noticed the growing things and their interaction with each other. He could tell you about the geological past of the area and point to where you would find abundant fossils of creatures that had lived there when the area was still under water. His ability to see the parallels was beautifully expressed in something he wrote later on about there being a place for small and big business within the total picture of America’s economic life. Here is how he put it:

In 1932, Dr. Morgan took a year’s sabbatical, in the course of which he went to visit the Unitarians in Transylvania. He had been a Lay Leader of the Unitarian Church in the United States, and one of his Antioch students had married an idealistic, young Transylvanian Unitarian Minister, Francis Balazs. Balazs had returned from America and his studies here by way of Asia and, having visited Gandhi and Schweitzer, had finally gone to minister in a tiny vIllage in Transylvania called Meszko, where he tried to implement some of Arthur Morgan’s ideas for community development. He had organized a cooperative movement and had revolutionized in many respects not only his own village but the entire valley. In a ministry of only five years, he wrote several books about the improvement of village life.

When Morgan arrived in Meszko in 1932, Francis Balazs lay mortally ill with tuberculosis, and his church work was being cared for by a theological student sent out from the seminary in Kolozsvar. The student’s name was Vilma Szantho. She was the first woman ever to be admitted to theological school in that part of the world. Francis Balazs had been the first minister to invite a woman to preach in his church, and she was that woman. That is how Arthur E. Morgan knew both Vilma and me some six years before we ever met each other. The deepening friendship grew across the years into our marriage.

Arthur Morgan was born near Cincinnati, Ohio, but his family soon moved to St. Cloud, Minnesota, where he grew up. His father was an engineer, and his own interests leaned in that direction. Very early in his life he seems to have had a concern for social improvement for when he was just ten years old he was publishing great quotations for human uplift on a regular basis in one of the St. Cloud newspapers. In 1895, at the age of seventeen, he experienced a vivid vision of an ideal community while walking home through the woods. The Utopian dream of an ideal society was thereafter to direct his steps for the rest of his life.

The idealistic Morgan’s most evident achievement was literally cast in concrete: the TVA dams.

After graduating from high school he left home, at the age of nineteen and spent the next three years doing many kinds of outdoor work, mostly in Colorado, finding that there was a real dearth of understanding of hydraulic engineering. Then he returned home, reading and studying problems relating to hydraulics, and began to practice engineering with his father, learning his profession in the old-fashioned way, from the ground up, by apprenticeship. Perhaps this is how he became committed to the alternating work-study method of education which he later introduced at Antioch. He married and had three children, Ernest, Griscom and Frances, each of whom would later have a distinguished career centered on some aspect of human service.

At the age of thirty two, he founded his own engineering company, and three years later, after a disastrous flood had practically wiped out the city of Dayton, Ohio, he was called to take full charge of the Miami River Flood Control Project, involving the building of several huge dams. This work he did so well as to be set on the road to worldwide engineering fame.

In 1919 Arthur Morgan was appointed to the Board of Antioch College, a dying institution in Yellow Springs, Ohio, a moribund village some eighteen miles from Dayton. He saw Antioch and Yellow Springs as a kind of double opportunitv to test out his higher educational ideas and his concepts for community development. He was made President, and there began a thrilling experiment in innovative higher education. When I arrived at Antioch in 1931, I found the strong emphasis was upon becoming a well rounded, whole man or woman dedicated to the welfare of humanity. To accomplish this there was a broad range of required courses, though attendance at them was not compulsory in accord with his emphasis upon self-discipline, but an art major, for example, was required to know something about the sciences; the science major to take courses in the humanities and to try his or her hand at the arts. Everyone was required to take courses in personal finance and budgeting, personal health and physical education. Spectator sports in the form of varsity athletics had been abolished by vote of the student body in favor of intramural sports in which everyone took part, and every dormitory hall developed its own personality and sports teams in place of fraternities or sororities. The college slogan inherited from Horace Mann, the first President, was, “Be ashamed to die until you have won some victory for humanity!”

In fifteen years Arthur Morgan built up Antioch College to where it was ranked among the top three colleges of the nation in a study by the Carnegie Corporation. Perhaps the most notable of his innovations was the work-study method in which students would study for ten weeks, and then go off campus to work on a job out in the real world. He believed that such an alternation would keep curriculum alive and help the student to apply and assimilate what he was learning in the classroom.

In 1933, Arthur Morgan was called by President Franklin D. Roosevelt to initiate and head the vast development project known as the Tennessee Valley Authority, at that time the greatest effort at regional development of natural resources and human beings ever attempted in the history of the world.

Morgan told the story of how Roosevelt had told him that he had a free hand, but not twenty steps from Roosevelt’s office, he was met by Jim Farley with a long list of people to be employed. Arthur Morgan, with typical forthrightness, turned sharply about, took Farley by the arm and took him right back into the President’s office, showed the President the list, and asked if he was or was not to have a free hand. Laughing the President took the list, and reassured him that he and no one else would make the decisions. 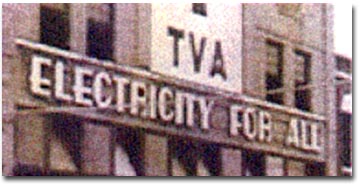 It is ironic that while Arthur Morgan was able to resist political corruption and corporate venality and to contend successfully with mighty natural forces, he was unable to cope with the intrigues, the contempt for his social ideals and policies, and the “dirty tricks,” like the doctoring of minutes and misrepresentation of his views, on the part of one of his co-chairmen, David Lilienthal, and after six years he was removed from his post. Nonetheless, the basic character of TVA had been established and though his so-called visionary projects were discontinued under his successor, many of them were revived under later administrations.

When Arthur Morgan came home to Yellow Springs after the TVA dismissal at the age of sixty, a crowd of a thousand persons had gathered at the station to say “welcome home! we love you!

It was during this same period of intense preoccupation with the TVA and its victories and disappointments that he finished a lifelong work on a biography of the great Utopian of the nineteenth century, Edward Bellamy, and discovered connections between Utopian writings and actual ideal societies. This led to his landmark volume entitled, Nowhere Was Somewhere.

Upon his return to Yellow Springs in 1939, Arthur Morgan turned his thought and energy to the problem of revitalizing America’s small communities, the “Seedbed of Society” and the garden in which human character is grown. It was a return to an old love, for he had already built model villages in Ohio and Tennessee and sparked a successful “intentional” community in North Carolina. He had been the moving force transforming the village of Yellow Springs from a moribund littIe hamlet to an exciting and vibrant ideal community in which people wanted to live. He succeeded beyond his own modest hopes, and Yellow Springs today is a monument to his vision and idealism.

— Abridged from an address delivered at the Community Church of New York (Unitarian Universalist) in 1975.

As the small community is, so will America be. Yet we have neglected our small communities, exploited them and robbed them. When they have deteriorated to a certain point, they become so unattractive to intelligent, ambitious persons that the exodus of quality is accelerated. If our enemies had devised a program for bringing the greatness of America to an end, could they have been more effective?

Yet there is no inherent need for this deterioration of the small community. If men and women of character and purpose come to see the significance of the present situation, they can make our small communities such live, interesting, adequate places to live in that young people of quality will prefer to stay there.

Why I Believe in Advancing Unitarianism
By Arthur E. Morgan

This, then, is the call of the liberal: to free himself from credulous loyalties and commitments; to develop objectivity; to cultivate an appetite for inquiry; and to develop gradually a discriminating appraisal based on full recognition of realities. This attitude will develop humility, for the difficulty of the process will be realized.

Freedom to inquire, including undisouraged appetite for inquiry, is the mother of all freedoms.