Editor’s Note: The biographical entry for Arthur Code differs from others in our collection in that it is an autobiography written by Code himself. 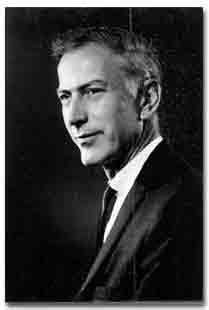 I am a member of the First Unitarian Society of Madison, Wisconsin. I was born on August 13, 1923 in Brooklyn, New York and attended an Episcopal Church in the area. That was fine as a child but as I began to find my place in the world, organized religion and doctrine did not fit in. Around 1960 I learned of and joined the First Unitarian Society of Madison. I appreciated the openness and the intellectual atmosphere of the Society and believe that all of our children benefited from this foundation. Although I no longer live there, we do spend some time there, support the society and continue to enjoy long-standing associations we formed there.

My first astronomical adventure was viewing a solar eclipse from the roof of our six-story apartment building in 1930. When I started high school, books by the British astronomers James Jeans and Arthur Stanley Edington captured my imagination. Here I learned about the “Expanding Universe.” My future was set: I was going to be an astrophysicist, and the University of Chicago was the place for me. After my first year at the University, however, the United States entered World War II. I enlisted in the Navy and was sent to Radio Materiel School. My training brought me back to Chicago where I married Mary Gould, a coed at the University of Chicago, in 1943. We have had a rich and interesting life and raised four children of whom we are proud.

While in the Navy, I took exams, which enabled me to pursue graduate work after my discharge from the service. Through Otto Struve, Director of the Yerkes Observatory at Williams Bay, Wisconsin, I was accepted for graduate work in astronomy. Each day was new, productive, and exciting. At Yerkes Observatory the major professor for my thesis research was Chandrasekhar, who many years later received the Nobel Prize in Physics. 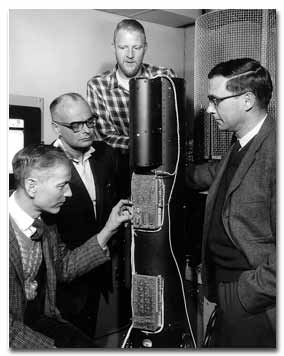 Code and colleagues during the development of the OAO.

When I left Yerkes Observatory, I went to the University of Virginia, where I started a photometry program and constructed a photoelectric photometer before returning the next year to the University of Wisconsin. There my research focused on quantifying the measurements of the brightness of stars and galaxies. Of particular interest were the hot blue stars that make up the spiral arms of our galaxy.

To extend our study of the galaxy Ted Houck, a Wisconsin graduate student, and I traveled to South Africa where I obtained spectra for classification, and Ted carried out photometric observations of the blue stars. Ted worked at the Cape Observatory in Cape Town and I at the Radcliffe Observatory then located outside Praetoria. We met once a month at new moon at the Harvard Observatory‚ Boyden Station outside of Bloernfontain. The sky was exceptionally dark there, and we took sky camera images in many wavelengths. The center of our galaxy is located nearly overhead at this site, and the photographs obtained were for many years in great demand for books and magazines.

Later, upon becoming a tenured professor at Cal Tech, I was able to use the Palomar 200-inch telescope, then the largest in the world. Also at Cal Tech physicists were making great inroads into the understanding of elementary particles. Murray Gell-Mann conceived of Quarks, the building blocks of protons and other elementary particles, and Richard Feynman pioneered quantum electrodynamics, ideas intimately entwined with the start of the Big Bang Universe. Both received Nobel Prizes. On the astronomical side, it was discovered that the very atoms from which we were made were formerly in the center of some star in the past history of our galaxy. 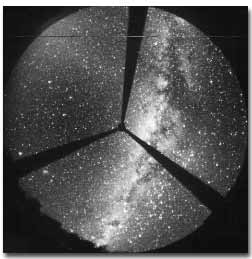 Photograph of the Milky Way taken in 1953. The camera itself is located at the apex of the tripod and is looking down at a spherical mirror, giving it a field of view of up to 150 degrees. By Theodore E. Houck and Arthur C. Code.

In December 1957 Sputnik was launched. I realized that telescopes would be put in space, and astronomers should be involved. When the National Academy of Sciences sent out a letter soliciting proposals for a 100-pound satellite, I was prepared to accept an appointment at the University of Wisconsin as Director of the Washburn Observatory and start a space astronomy program aimed at developing an ultraviolet photometric space telescope. We started the University of Wisconsin Space Astronomy Laboratory, which still carries out astronomical space experiments.

The Orbiting Astronomical Observatory (OAO) was launched on April 8, 1966 from Cape Kennedy, but apparently the batteries exploded. After nine years of intense research, the failure was deeply felt. Although some scientists and engineers left the project after the disaster, OAO II was launched on December 7, 1968. This first observatory in space operated successfully for four years, opening up an entirely new era of astronomical investigations. To me the risk was worth it.

Sometimes, when I paddle down a winding river where the currents have swept the bank free of any sign of civilization or skied through the forest with only pristine snow before me, I feel as though I am discovering a new land never before seen. Of course many have been there before me. That is how I felt as the new data came in from OAO. I was standing some place viewing something that no one had ever seen before. In this case, however, it was true, no one else had been there before. This is the reward for the effort and the reason it was worth the risk. Another bonus of embarking on such adventures is the camaraderie that develops between all those who share the adventure. It is so satisfying to see the accomplishments that can be achieved by teamwork. 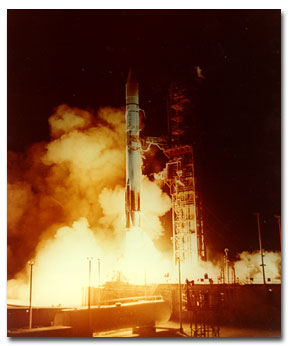 The launch of the OAO by an Atlas Centaur rocket.

My early research was in theoretical astrophysics studying radiation transfer such as light transmission in the atmospheres of stars and in the gas and dust between stars. Observational research initially centered on the distance to hot stars that define the spiral arms of our galaxy.

Beginning with the formation of NASA, I have been involved in “Space Astronomy.” As Principal Investigator for the first Orbiting Astronomical Satellite, various sounding rocking payloads, and the Astro shuttle missions, I directed the design, operation, and data analysis activities. This research involved ultraviolet photometry, spectroscopy, and polarimetry of planets, stars, interstellar matter, and galaxies, each at the time being the first such measurements. To support this research, I have worked on new instrument development in telescope design and spectrophotometric instrumentation primarily directed to observations that could only be obtained from space or had never been done before. I have also been intimately involved in the development and operation of the Hubble Space Telescope from its conception to the present.

Observational research has involved photometry and spectroscopy from both ground-based facilities and space observatories. Recently I have returned to radiation transfer studies using Monte Carlo techniques, which exploit the power of modern computers, and also to galactic structure research using the new WIYN telescope.The thread that runs through all this research is the development of instruments that would provide quantitaive measurements that could confirm or rule out theoretical predictions on the structure, formation, and evolution of stars, and to study the connection with other galaxies of stars and the space between the stars. 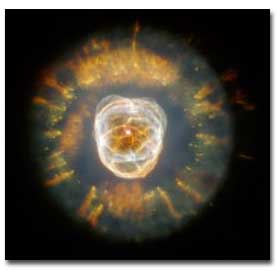 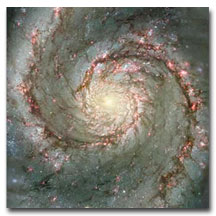 An image from the Hubble Space Telescope the Whirlpool Galaxy, M31. 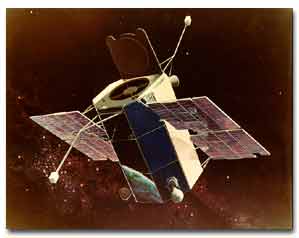 An artist’s rendition of the OAO in orbit.

Among his many honors, Dr. Code was awarded the NASA Distinguished Service Medal in 1992. The citation reads:

For dedication and outstanding scientific leadership in pioneering space astronomy achievements throughout a long and challenging career.