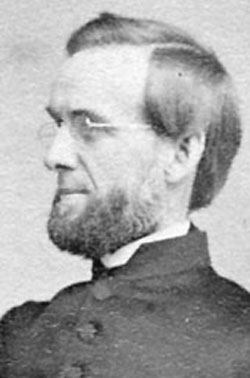 Arthur Buckminster Fuller was born at Cambridge, Massachusetts, August 10, 1822, the sixth child of Timothy Fuller and Margaret Crane. The father was a man of high distinction, one of five brothers, all in the legal profession, a representative in Congress from 1817 to 1825, speaker of the Massachusetts House of Representatives in 1825, and a member of the Executive Council in 1828. His eldest daughter was Margaret Fuller, a woman of singular genius. Arthur Fuller was brought up in Cambridge and in Groton, whither the family removed in 1834. Arthur enjoyed alike the social and literary circles of Cambridge and the vigorous out-of-door farm life of Groton. After his father’s death in 1835 the care of the farm came chiefly to Arthur, but he pursued his preparation for college under the direction of his sister Margaret, a teacher of extraordinary gifts and influence, and later at Mrs. Ripley’s famous school at Concord. He entered Harvard in 1839, and graduated honorably in 1843. During his college course he taught district school in Westford and Duxbury, where he earned high praise.

Immediately upon graduating he started for the West, and invested what remained of his patrimony in the purchase of a school in Belvidere, Illinois Here he had two years of hard work and rapidly extending influence. Early in this experience he took to preaching, and became a lay missionary, preaching and lecturing throughout a wide extent of territory, often in cooperation with his friend and neighbor, Augustus H. Conant.

In 1845 he returned East, and entered the Harvard Divinity School, where he graduated in 1847. The next year he was ordained minister of the church in Manchester, New Hampshire, and served there for five years. He was then minister for six years of the North Church in Boston and of the church in Watertown, Massachusetts, from August 1, 1859, to his enlistment as chaplain of the Sixteenth Regiment of Massachusetts Volunteers on July 1, 1861.

The ardent temperament, which he shared with his famous sister Margaret, quickened by his pioneer experiences in the West, led him to work with the zeal of a revivalist. He was candid of speech, hard-hitting, not always tactful, not readily adaptable, and so he did not fail to rouse some antagonisms, but everywhere his earnestness and energy won respect. He took active part in educational, temperance, and anti-slavery work, and was twice chaplain of the Massachusetts legislature. With indomitable industry and admirable skill he edited the writings of his sister Margaret, “a labor of love,” he said, “which I have joyed in. If I only live to send forth Margaret’s words from the press, as they should appear, I shall not have lived wholly in vain.”

Chaplain Fuller left Boston with his regiment on August 17, 1861, and, stationed at Fortress Monroe, he saw the battle of the “Merrimac” and “Monitor.” Then with his regiment he served through the Peninsula campaign, exposed to much hardship, but proving himself resolute and devoted. He contracted serious illness, and came home on a furlough, broken in health and spirits. As soon, however, as he was partially restored to health, he returned to duty, but his physical weakness made it impossible for him to follow the army in its new campaign; and, on certificate of disability, he was honorably discharged from the service, December 10, 1862, to the great regret of the officers and soldiers of his regiment.

On the day after his discharge the battle of Fredericksburg was fought. Upon the call for volunteers to cross the Rappahannock and clear the opposite bank of the enemy’s sharpshooters, Chaplain Fuller stepped forward, notwithstanding the fact that he had been discharged from all obligation to serve, so that, if captured, he could not expect to be exchanged, and, if killed, his widow could not expect a pension. He wore the uniform of a staff officer, which made him a special mark for the sharpshooters. Nevertheless, he volunteered, and crossed the river as a private, musket in hand. Hardly had he landed when he was instantly killed, December 11, 1862.

His life, written by his brother, Richard F. Fuller, was published in Boston in 1863, and an admirable sketch of his career, written by Colonel T. W. Higginson, appears in the Harvard Memorial Biographies.