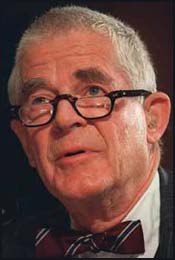 In a legal career of more than 60 years that began with clerking for the legendary federal court justice Learned Hand, Archibald Cox was often part of the “establishment.” But, in the great crisis of Watergate, he faced down a president without concern for that career.

Born in 1912, Professor Cox graduated from Harvard Law School in 1937, joining the Boston law firm of Ropes, Gray, Best, Coolidge and Rugg. He began his government career during World War II, when he was appointed to the National Defense Board, and then to the Office of the Solicitor General. When the war ended, he returned to Harvard Law School, this time as a professor. While there, he became adviser and speech-writer for John F. Kennedy, then the junior senator from Massachusetts. Cox took a four-year leave beginning in 1961 to join the Kennedy administration as solicitor general. At a time when civil rights protesters were routinely chased with dogs and clubbed, he became JFK’s point man on pursuing legal remedies to injustice, often appearing before the Supreme Court.

In May 1973, Watergate was still viewed by many as merely a third-rate burglary. Attorney General Elliott Richardson, a former law student of his, appointed him to the thankless job of special Watergate prosecutor. When the Senate investigation revealed the existence of audio tapes ordered by President Nixon, Special Prosecutor Cox subpoenaed them from his employer.

After two appeals of the subpoenas were turned down, the president offered to give the Senate and Cox written summaries of what was on the tapes. Cox turned down the deal. Nixon then ordered Richardson to fire him. But the attorney general refused to fire his former professor, and so did Assistant Attorney General William Ruckelshaus. Nixon then turned to the solicitor general, future Supreme Court Candidate Robert Bork, who did carry out the order. The event became known as the “Saturday Night Massacre.”

Nixon would resign less than a year later.

In his teaching career at Harvard and Boston University Law School, Cox established himself as one of the leading law educators of the 20th century. His handling of Vietnam War protests at Harvard remains a model of equanimity for college administrators.

Click here for supplemental reading about Archibald Cox on Amazon.