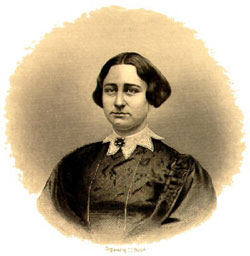 Antoinette Brown came of New England stock, sturdy and long-lived pioneers in Connecticut. Her grandfather, Joseph Brown of Thompson, Connecticut, served in the army all through the Revolutionary War and her father, another Joseph Brown, was in the War of 1812. Antoinette was a typical daughter of the line, energetic, resourceful and thrifty, with a keen sense of humor and a capacity to shoulder responsibility. The family moved in a wagon from the Connecticut farm to Henrietta, near Rochester, New York, and there Antoinette was born in a log cabin on May 20, 1825. She was one of ten children and the seventh child of a seventh son of a seventh son. The surroundings of her childhood were those of many another pioneer family. There were no stoves, lamps or matches. Fire was kindled from a tinderbox, candles were “dipped” in the home kitchen, baking was done in the great oven and meat roasted on the spit. Wool was sheared, spun, woven and made into garments by the industrious household. When she was nine years old Antoinette joined the Congregational Church, speaking of her religion with such eloquence that one of the deacons rose and said, “Out of the mouths of babes and sucklings the Lord hath perfected his praise.”

At an early age, too, Antoinette began to teach school, being determined to get an education and become a minister. She paid her own way to and through Oberlin, then the only college open to women. There she formed a lifelong friendship with Lucy Stone and later they married brothers, Henry and Samuel Blackwell. She graduated in 1847 and went on to study at the Theological School, graduating there in 1850. With Lucy Stone she attended and spoke at the first National Woman’s Rights Convention at Worcester, Massachusetts, and she also plunged into work for temperance and for the antislavery cause. In a letter to Lucy Stone she wrote, “I believe there is soon to be a new era in woman’s history and the means to effect this must be truth wielded in firmness, gentleness, and forbearance.”

In 1886, after some experience as a lecturer and evangelist, she was ordained and installed in the Congregational Church in South Butler, New York, the first woman in America to be regularly ordained and the first to perform a marriage ceremony. In the same year she was herself married to Samuel C. Blackwell, another pioneer abolitionist and suffragist. Their married life extended through forty-five years and they taught and worked together in complete harmony. All the Blackwells were advocates of progressive causes. Henry Blackwell, who married Lucy Stone, had another working partnership with his wife, and a sister, Elizabeth Blackwell, was the first American woman to graduate in medicine and she was followed five years later by her sister Emily. The pioneer spirit continued also in the Brown family. Antoinette’s brother, William Brown, was the minister of the Congregational Church in Newark, New Jersey. He married Charlotte Emerson, and she originated the idea of a General Federation of Woman’s Clubs and was the first president of that organization. 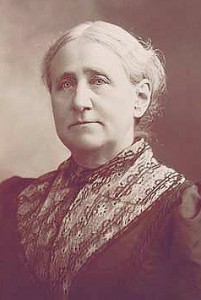 It is not surprising that with all these associations with progressive causes the Blackwells found themselves outgrowing the theological orthodoxy of their youth. After a few years Mrs. Blackwell resigned from her church and she and her husband entered the Unitarian fellowship. They became social workers in New York City, lecturing, preaching, organizing and writing for newspapers and periodicals. They lived successively in several New Jersey towns and finally settled in Somerville. Six children, all girls, were born to them. Much of their time was given to the Association for the Advancement of Women. Mrs. Blackwell wrote nine books, among them The Philosophy of Individuality, The Social Side of Mind and Action, and a novel called The Island Neighbors and a poem called “Sea–Drift.” She was keenly interested in the World’s Parliament of Religions held in Chicago in 1893 and spoke there on “Women in the Pulpit.” In the eighteen seventies the Blackwells established a summer home on Martha’s Vineyard and there Mrs. Blackwell planted trees and was as busy with hoe and rake as with voice and pen. After her husband’s death in 1901, she took up residence in Elizabeth, New Jersey. There, being, as was written of her, still “full of spice and vigor,” she organized and ministered to “All Souls Unitarian Church.” She gave the land for the church building and a study for her was attached to it where she gathered her books and memorabilia. Her own college, Oberlin, gave her the degree of Doctor of Divinity. She enjoyed life to the last, preached her last sermon on Easter Sunday when she was ninety years old and she died on November 5th, 1921, in her ninety–sixth year.