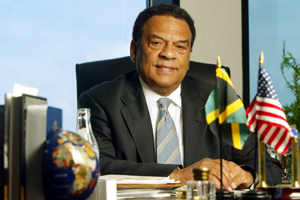 Andrew Young is an ordained minister, international businessman, sports enthusiast, human rights activist, published author and former public servant. He was elected to three terms in the United States House of Representatives from the Fifth Congressional District of Georgia, and, in 1977, President Jimmy Carter named him Ambassador to the United Nations. He served two terms as mayor of Atlanta and was co-chairman of the Centennial Olympic Games in 1996.

A Way Out of No Way: The Spiritual Memoirs of Andrew Young