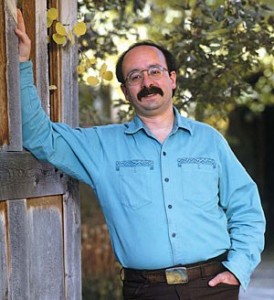 Amory Lovins leads a globetrotting life, but has lived in the same house in Snowmass, Colorado, for more than 20 years. The home is a solar-powered marvel of energy efficiency, and even boasts a tropical garden that grows bananas and papayas within the glassed-in atrium.

Lovins has a vision of our energy future: nothing less than shifting our primary fuel from oil to hydrogen. While many doubt hydrogen’s potential to power cars, heat homes, and run industries, Lovins declares that the hydrogen economy is coming—it’s not a question of if, but when. His goal is to bring the benefits of hydrogen on-line soon—and he considers that a very viable prospect.

There’s a team behind Lovins: his miraculous home doubles as headquarters for Rocky Mountain Institute (RMI), the nonprofit research and consulting firm that he and his former wife, L. Hunter Lovins, founded in 1982 “to foster the efficient and sustainable use of resources.” Although RMI is surely a green organization, its client list represents what some environmentalists would call “the enemy”—RMI has worked, for example, with 65 of the Fortune 500. Yet such clients lend RMI’s innovative ideas a real-world muscle that many green purists might envy.

Lovins’ optimistic futurism contrasts strongly with the dour, “everything-is-going-to-hell” outlook common in environmental politics. Yet even though most energy specialists admire Lovins’s brilliance, many question his pragmatism. “Amory is like a mystic, a guru,” says Littauer professor of public policy and administration William Hogan, an energy economist at the Kennedy School of Government. “He has been broadly right for a long time. The rub is when you get down to the details—can it be implemented?”

Similar questions were asked of Lovins’s intellectual forebear, R. Buckminster Fuller ’17 (1895-1983). Both men dropped out of Harvard and set out to change the world, not with political action but through superior design.

Lovins migrated to Magdalen College, Oxford, where “They don’t breathe down your neck and let you study a lot of things,” he says; two years later he became a don at Merton College, Oxford. He wrote and took many of the photographs for a book on an endangered national park in Wales, commissioned by David Brower, president of Friends of the Earth and “the greatest conservationist of the twentieth century,” in Lovins’s estimate. Lovins went to work full-time for Friends of the Earth.

In a celebrated 1976 article in Foreign Affairs, “Soft Energy Paths,” the 28-year-old Lovins outlined an alternative future where efficient energy use and renewable energy sources like wind, solar power, and biofuels (the “soft path”) gradually but steadily supplant a centralized energy system based on fossil and nuclear fuels (the “hard path”). By 1978 he had published six books, consulted widely, and was “active in energy affairs in about 15 countries as synthesis, lobbyist, and cross-pollinator of grapevines,” as he wrote in his tenth-reunion report.

The Natural Advantage of Nations: Business Opportunities, Innovation and Governance in the 21st Century