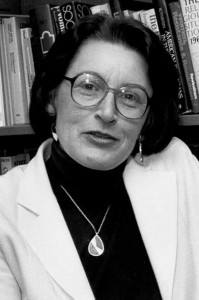 Alice S. Rossi, one of the founders of the National Organization for Women (NOW), as well as the seventy-fourth president of the American Sociological Association, said:

“In 1964 I wrote an article in the journal Daedalus called ‘Equality Between the Sexes: An Immodest Proposal.’ By later feminist standards my argument for equality was mild indeed, but the reaction of traditionalists in 1964 was not. I was considered by some a monster, an unnatural woman, and an unfit mother. My husband, also a sociologist, received an anonymous condolence card lamenting the death of his wife.

“My theme was simple enough. For the first time in known history, I wrote, motherhood had become a full-time occupation for adult women, and motherhood was not enough. For the psychological and physical health of mother and child, for the sake of the trembling family unit, and for the progress of society, equality between men and women was essential and inevitable.

“Older women, who were past career choices, resented my article; younger women felt reprieved. I know for certain that my essay lowered the birth rate by at least 12 children, and increased the number of Ph.D.’s accordingly.”

Rossi, Professor of Society at the University of Massachusetts at Amherst, is the editor of the acclaimed Feminist Papers, featuring the essential works of feminists—from Adams to de Beauvoir—over a period of 200 years. With Jerome Kagan, Harvard psychologist, she wrote a book about The Family. She also wrote Academic Women on the Move.

Click here for supplemental reading about Alice Rossi on Amazon.