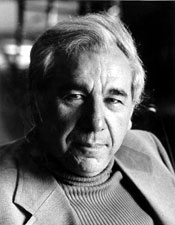 Alfred Kazin, the great literary critic and cultural historian, belonged to a wonderful generation of writers and critics, known now as the New York intellectuals. Many of them were Jewish, the sons of working-class immigrant parents. Many began their journey to the great world by going to City University.

Kazin’s most acclaimed book is On Native Grounds, his conversation with Hawthorne, Whitman, and Dickinson. His most tender book is his childhood memoir, A Walker in the City, published in mid-life.

—By Richard Rodriguez of the Pacific News Service, Courtesy of PBS.org

On Native Grounds: An Interpretation of Modern American Prose Literature