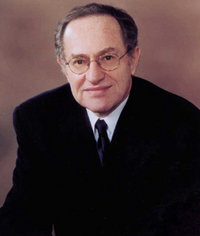 Alan “Morton” Dershowitz (born September 1, 1938) is a lawyer and jurist from the United States. He has spent most of his career at Harvard Law School, where at the age of 28 he became the youngest full professor in the law school’s history, and is now the Felix Frankfurter Professor of Law. In addition to his teaching, Dershowitz is a prolific author who makes frequent media and public speaking appearances and has worked on a number of high-profile legal cases.

As a criminal appellate lawyer Dershowitz successfully argued to overturn the conviction of Claus von Bülow for the attempted murder of his wife. The publicity surrounding this New York society scandal fueled enough interest that Dershowitz’s book on the case, Reversal of Fortune, was turned into a film starring Jeremy Irons and Glen Close. In addition, Dershowitz has often commented on Judaism, Israel, civil rights and liberties, and the First Amendment.

Click here for supplemental reading about Alan Dershowitz on Amazon.