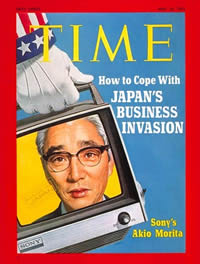 From the rubble of postwar Japan, Sony’s charismatic co-founder built his electronics firm into a trusted brand and a truly global company. He was the scion of a prosperous merchant family that had been brewing sake and soy sauce in central Japan for more than 300 years. In the spring of 1946, released by his father from his obligation to take over the family business, Akio Morita co-founded Sony with an electrical engineer named Masaru Ibuka. For over 40 years, Ibuka and Morita ran Sony together from adjoining offices, reveling in each other’s company. Ibuka’s great gift was inspiring his engineers to overreach themselves. Morita, a brilliant marketer, transformed Sony into an international presence. In the process, he matured into an irresistibly charismatic advocate of Japan’s business interests. By 1993, when he suffered a stroke that deprived him of speech and confined him to a wheelchair, he had become the best-known Japanese citizen in the world.

Made in Japan: Akio Morita and Sony