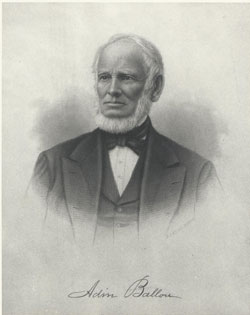 Founder of the utopian community at Hopedale, and a Universalist and Unitarian minister, Adin Ballou was a major contributor to ideas of Christian non-resistance. He was born in Cumberland, Rhode Island, on April 23, 1803, a descendant of Maturin Ballou who was associated with Roger Williams in the founding of Providence. Adin’s father was an industrious farmer who brought up his son after the manner of the average farmer’s boy of the time. His desire for an education was strong, but his early school privileges were scanty, and his father was too poor to send him to college.

When he was eleven years old, a great revival, or “reformation,” as it was called, swept through the northern portion of Rhode Island, and most of his family united with a newly organized church in the Christian Connection, of which his father became a deacon.

This event roused serious thought and deep interest in the boy, who after a season himself united with the church through the established form of baptism by immersion. After the first excitement was over, he realized that the experience was no part of true religion, but it was only the beginning of a new life which would involve many conflicts before the spiritual nature should be complete master of his life. Yet he continued his interest in religious things, and by quiet thought and vigorous self-discipline developed and strengthened the higher qualities of character.

When about eighteen years old, an experience came to him which was the turning-point in his life. He seemed to see in the night a vision of his brother who had died five years before and who commanded him to preach the gospel. Deeply impressed with the conviction that this was a call from God, a few months afterward he announced in public meeting that on the following Sunday he would preach in that place. He did so, speaking mostly by inward impulse and with little preparation and so successfully that numerous invitations came to him at once to speak in other places. Thus he began without training or license a ministry which was to prove long and fruitful.

In September, 1821, he was ordained by the Connecticut Christian Conference, and continued preaching for a year or more in the vicinity of his home.

Soon, however, a radical change took place in his theological views. Coming in contact with Universalism and studying the subject with a view to controverting it, he found himself in the end forced to accept the doctrine of final restoration. This stand caused his excommunication from the church to which he belonged and his deposition from the ministry. He was welcomed by the Universalists, and on December 10, 1823, at Milford, Massachusetts, was ordained as a Christian minister and shortly afterward installed over the society in that place.

Mr. Ballou proved an interesting preacher, and in 1827 was called to the Prince Street Universalist Society in New York City. He accepted and removed thither, entering on his work with great zeal. Here in addition to his regular work he established a semimonthly magazine, the Dialogical Instructor. The hoped-for results did not come, however, and before the end of a year he resumed his labors at Milford.

Owing to a difference of views in regard to future retribution, Mr. Ballou found himself out of sympathy with most Universalists, and, withdrawing from his church in Milford in 1831 was settled over the First Church and Society in Mendon by a council of Restorationists and Unitarian ministers.

Mr. Ballou was profoundly interested in the humanitarian movement that about this time began to spread over the country. He labored ardently for the temperance reform and for the anti-slavery cause, becoming prominent as an abolitionist and afterward active in the various philanthropic causes that occupied the attention of the progressive minds of his time.

It was under the inspiration of his love of humanity and by the help of sympathetic friends that what is known as the Hopedale Community was established. This was an attempt to unite all special reforms and organize them into one general movement for putting an end to all human ills by placing society on a Christian basis. To the development of this embryonic kingdom of God he gave the best years of his life. Leaving his Mendon parish, he returned to a quiet valley in Milford with a few like-minded men and women, and toiled with hand and brain to make his ideas a success. He preached, wrote, lectured, and traveled far and wide. He published a large volume, Practical Christian Socialism, and many tracts developing his scheme. Like many similar experiments, the Hopedale Community only partially succeeded, and after fourteen years was abandoned.

After the Hopedale Community was disbanded in 1856, its religious interest became merged in the Hopedale Parish, which connected itself with the Worcester Conference of Unitarian and other Christian Churches, and Mr. Ballou was the regularly employed minister until advancing years led him to withdraw in 1880, at the age of seventy-seven. Occasional services occupied him, however, till the very end of life, his last sermon having been delivered in Hopedale, November 3, 1889. He enjoyed almost uninterrupted good health from childhood to old age, and his powers of mind retained their strength to the end. He died on August 5, 1890.

Mr. Ballou will be remembered as a man of wide and sound learning, possessed of a logical mind and a strong love of truth, as one faithful to his convictions, of unquestioned integrity, of a genial disposition and a broad sympathy for all classes of people, and, finally, as possessed of a living faith in spiritual realities and an assurance of the possibility of a divine order of society, a veritable kingdom of heaven on earth.