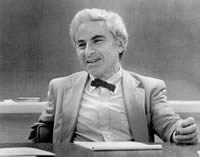 Professor Adam Yarmolinsky, who served in numerous capacities in the Kennedy, Johnson and Carter administrations, died in January 2000. Besides serving in the White House, Yarmolinsky held posts in the Arms Control and Disarmament Agency and was an aide to Secretary of Defense Robert McNamara in the Pentagon, where Yarmolinsky was an early critic of American policies in the Vietnam War.

Following government service, Prof. Yarmolinsky became Regent’s Professor of Public Policy at the University of Maryland, and he was also a founding member of the Institute of Medicine of the U.S. National Academy of Sciences. Although he attended but one Pugwash meeting, a 1993 workshop on military and civilian R&D in London, Prof. Yarmolinsky’s candor and intellectual honesty were very much in the Pugwash tradition.

Organizing for Interdependence: The Role of Government