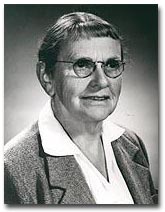 As her name suggests, she was a member of two of the most illustrious Unitarian families of New England: the Adamses and the Eliots. She was also related to the Mays. Abby Eliot, as she was called, was born in Dorchester, Massachusetts on October 9, 1892, the third child of Rev. and Mrs. Christopher Rhodes Eliot. Her father was the minister of the Meeting House Hill Church in Dorchester for thirteen years. Following a year of study at Oxford, he became minister and social worker of Bulfinch Place (Chapel) Church, one of the mission churches of the Benevolent Fraternity in Boston’s West End. The family lived at 2 West Cedar Street on Beacon Hill. Abby attended Radcliffe College, graduating in 1914. 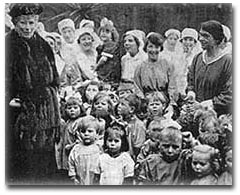 Abigail Eliot with Queen Mary at the Rachel McMillan Nursery School and Training Centre in London (1921).

Eliot began her career as a social worker with the Children’s Mission to Children. Quickly disillusioned with social work, she studied at Oxford for the academic year 1919-20 and, upon her return, was invited by Mrs. Henry Greenleaf Pearson to establish a nursery school in Boston. The Women’s Education Association then sent her to study at the McMillan Nursery School in London for six months. Returning in January, 1922 to join the Ruggles Street Day Nursery in Roxbury, Eliot also continued her formal education, earning a M.Ed. from the Harvard Graduate School of Education in 1926 and a doctorate in 1930.

As the nursery school movement grew, Eliot was part of the leadership that formed the National Association for the Education of Young Children as well as the National Association for Nursery Education. In 1933, she was their representative to the federal Works Progress Administration, which provided funds to nursery schools for children in unemployed families and jobs for teachers. Later, she became responsible for the program in the New England states. During World War II she consulted on the provision of day care for the children of war workers under the Lanham Act. 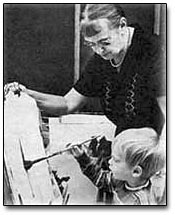 In 1951 the Nursery Training School affiliated with Tufts University and moved to the campus in 1954. In 1955 the Tufts Corporation changed the name to “Eliot-Pearson School.” In 1952 Eliot retired as head of the school which she had founded and moved with her friend Anna Holman to Pasadena, California to found a Nursery Training School at the Pacific Oaks Friends School.

Upon their return from California in 1954, Eliot and Anna Holman moved to a house on Main Street in Concord on the Sudbury River, where they lived together until Holman’s death in 1969. In 1971 Eliot gave the house to the First Parish in Concord, and it became the home of Rev. and Mrs. Dana McLean Greeley. In Concord she assisted in the First Parish Sunday School and taught for three years at the Brooks School. She assisted in the formation of the Walden Clinic, now known as the Eliot Community Mental Health Center, and Belknap House, a boarding house for the elderly. In 1961 she became the unpaid Director of Development for the Eliot-Pearson School. She raised funds to build the Children’s School and the administration building. In 1964 the school became the Eliot-Pearson Department of Child Study at Tufts University which, in 1981, began to award the Ph.D.

Of her Unitarian faith, Eliot said, “Religion has always been an important part of my life ‚ a subconscious influence, as well as a conscious directive.” She proudly affirmed that she was “born and bred a Unitarian” and that she had “always gone to church nearly every Sunday.” 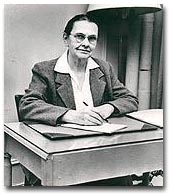 In religious education, Eliot worked as a teacher and program director. She supported teaching the Bible in Unitarian Church schools against the views of Sophia Lyon Fahs who advocated a more naturalistic approach to religion with children. “I always felt that Mrs. Fahs threw the Bible out of the window,” she is reported to have said. Despite this difference of approach, Eliot respected the great religious education reformer highly, affirming that Fahs “was a great person and led the religious education for the denomination in good, up-to-date directions.”

Abby Eliot lived her last years at Rivercrest in Concord because of her failing eyesight.

Her brother, Frederick May Eliot, was minister of the Unitarian Church in St. Paul, Minnesota and then President of the American Unitarian Association (AUA), 1937-1958. Dr. Martha May Eliot, her sister, was Chief of the U.S. Children’s Bureau and worked for UNESCO and the World Health Organization (WHO).

— By Paula Robbins, Courtesy of the Dictionary of Unitarian and Universalist Biography

The Biography of Frederick May Eliot

The Biography of Martha May Eliot