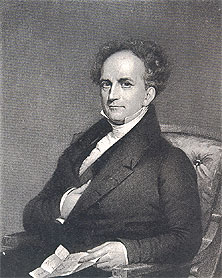 The younger brother of Amos Lawrence was a businessman, diplomat, and philanthropist whose father fought at Bunker Hill.

While a partner with his brother in founding the firm of A. and A. Lawrence, he also engaged in fostering industrial development and was an early advocate of railroad extension from Boston and Worcester to Albany. The town of Lawrence, Massachusetts, is named in his honor.

In 1834 Abbott Lawrence was elected to the U.S. House of Representatives, and served on the Ways and Means Committee. In 1849 he was U.S. ambassador to the Court of St. James’s.

When he died in 1855, his estate included bequests for model housing for the poor as well as an endowment for the Lawrence Scientific School at Harvard. The original school has been succeeded by the strikingly modern Undergraduate Science Center designed in the same location by the office of L. J. Sert in 1970.